Andrew Jones displayed great determination and skill to see off 121 other competitors and pick up the APAT Championship series event in Cardiff for £2,750. 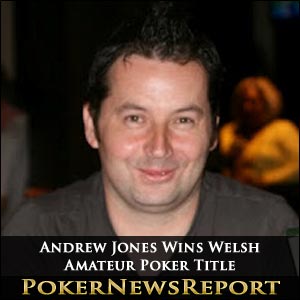 Englishman Andrew Jones displayed great determination and skill to see off 121 other competitors and pick up the Amateur Poker Association & Tour (APAT) Championship series event in Cardiff for £2,750.

Jones also collected an APAT National Gold Medal and a Genting Poker Series (GPS) seat after beating fellow Englishman JP Round in their heads-up clash in the £75+£7.50 buy-in No-Limit Hold’em William Hill Welsh Amateur Poker Championship as the second leg of the APAT’s sixth season at the G Casino in the Welsh capital city.

Day 1 saw 13 levels played out, with the field reduced to 31 players and led by English duo JP Round and Gary Wilden, while Day 2 started briskly as the shorter stacks aimed to move up the leaderboard.

It took just four hours for the nine-handed final table to be reached, with Dan Carpenter (372,900 chips) and Wilden (314,300) leading the way. Eventual winner Jones, however, entered the closing stages way behind as the short stack on just 97,000.

The blinds were at 5,000/10,000 at this point, meaning Caerphilly-based Jones held less than 10 big blinds. But he stayed in contention as David Jackson exited in ninth place for £210, to be surprisingly followed by Wilden (eighth for £270) and Carpenter (seventh for £370) as the short stacks doubled-up.

Jones was the prime beneficiary, though, as he doubled-up several times before the only surviving Welshman, Jason Kemp, was eliminated in sixth place for £460 and Jason Stephens hit the rail in fifth for £590.

Warren Jones was next to leave the final table, when his ace-five failed to overcome the ace-queen of Kevin O’Driscoll, leaving play three-handed. But O’Driscoll couldn’t capitalise on that as short stack Round – who had been chip leader for long periods of the competition – doubled-up through his fellow Englishman before Jones completed the job by eliminating the latter to set up his heads-up clash with Round.

That head-to-head took just two hands to complete, with Jones’ ace-king beating the pocket tens of Round after a king arrived on the turn.

The APAT’s next stop pulls into Cork for the Irish Amateur Poker Championship, which will take place at the Macau Club from July 7 to 8.