Hinrichsen played to defy the odds in the WSOPE NL Hold´em Championship, collect first prize of €148,030 and claim the treasured World Series of Poker bracelet. 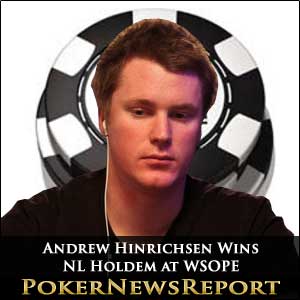 Australian Andrew Hinrichsen played a classic game of NL Hold´em to defy the odds in the WSOPE €1,090 NL Hold´em Championship, collect the first prize of €148,030 and claim the treasured World Series of Poker bracelet.

It was a remarkable achievement for the young poker player from Melbourne, who now ranks 25th in the all-time list of successful Australian poker players, after twice being forced to put his tournament life on the line and fighting back to snatch the title from long-time chip leader Gianluca Speranza.

Speranza Wants to Finish in a Hurry

Gianluca brought a massive chip advantage to the final table and wasted no time in firing his chips out. In one of the first hands of the day, he busted short-stacked Gregory Lejolivet and, after Nabil Nedjai and John Eames had been sent to the rail in quick succession (by Eric Baudry and Tarcisio Bruno respectively), claimed the biggest pot of the day when taking out Eric Baudry to increase his chip stack to over one million. He then took a big slice out of Tarcisio Bruno when three betting him for six figures and then tripping sevens on the turn and river against the same opponent.

Meanwhile, Andrew Hinrichsen was not enjoying such good fortune. Having given up big pots uncontested against Speranza and Roberto Romanello, Hinrichsen allowed Bruno to double up through him when his K♥ Q♠ came second to the Italian´s K♠ K♣. His redemption started with the arrival of two red Aces which held against Romanello´s 5♦ 5♣ shove and he doubled up soon after against the chip leader when his K♠ K♦ managed to survive against Speranza´s A♥ J♥.  Even still, Hinrichsen was still looking at a mountain to climb, with less than half the chips of the man out in front.

With five players left in the tournament, the most popular winner would have been UK poker player Roberto Romanello. Already a WPT and EPT champion, victory in the NL Hold´em Championship would have given him a unique triple crown, as all three legs would have been won in Europe. Sadly for Romanello, shortly after coming second to Hinrichsen´s A♥ A♦, he ran his A♠ 2♦ into the A♥ K♣ of Bernard Guigon and finished in fifth. Guigon´s victory was short-lived, as he was next to go – his Q♦ 10♠ failing to catch against Speranza´s A♠ 2♠.

Speranza never gave up the lead throughout three-way play, and it was left to Hinrichsen and Tarcisco Bruno to battle out who was going to finish in third and who was going to go head-to-head against Speranza. Hinrichsen looked to be slipping out of the tournament when tabling 9♥ 10♥ on a shove against Speranza´s A♥ 10♠, but managed to hit two hearts on the flop and one on the turn to double up. Bruno by comparison was doubly unfortunate to lose a big stack of chips to Speranza´s flopped full house and then have his compatriot river an Ace to crush Bruno´s pocket tens and bust him out of the tournament.

Speranza Cracks in Heads Up

Going into the climax of the tournament, Gianluca Speranza held a commanding advantage over Andrew Hinrichsen of 1.8 million chips to little more than 540,000, but a series of three-bets saw the Australian gain a little back. Fifteen minutes into the Heads-Up, the game was turned on its head when Speranza (5♣ 5♠) called Hinrichsen´s shove (10♥ 8♥) and the flopped 10♣ gave Hinrichsen the chip lead for the first time since the start of Day 2. Fifteen minutes later it was all over.

On a flop of K♥ 7♣ 3♦, Hinrichsen made a bet of 115,000 which Speranza called. Hinrichsen was again the aggressor after the 6♣ turn – this time with a further 200,000 chips – and again after the 3♠ turn, when he announced he was all-in. Speranza snap-called the bet and tabled K♣ 9♠ for two pairs. Hinrichsen slowly turned over A♠ K♠ for the same two pairs, but with better kicker.

771 players entered the €1,090 buy-in tournament for a total prize pool of €740,160. With that ace kicker, Andrew Hinrichsen collected €148,030 while the Italian – who looked visibly devastated – took second place and €91,262. The remainder of the leading payouts are as follows:-