A record entry for a WSOPE event was achieved yesterday, when 771 players ponied up the €1,090 to enter the second bracelet event in the World Series of Poker Europe. 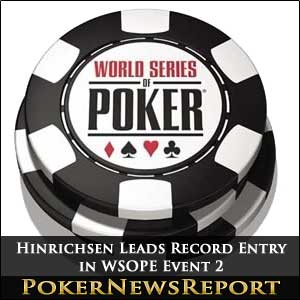 A record entry for a WSOPE event was achieved yesterday, when 771 players ponied up the €1,090 to enter the second bracelet event in the World Series of Poker Europe.

Smashing the previous record of 609 set in 2009, the tournament attracted a quality field of leading international poker players – with less than 14% of the original entrants remaining after only nine levels of play. 104 players will start Day 2 (of 3), chasing a valuable first prize of €148,030 and currently being led by Australian poker player Andrew Hinrichsen.

Andrew Hinrichsen enjoyed the sort of first day that tournament poker players dream of. Taking a valuable pot in the first level of the day with A♣ K♦, he chipped up nicely in a three-way pot when his flopped pair of Queens held up, and then caught two pairs with 9♥ 3♣ to eliminate a player who had shoved all-in with second pair. Using his enhanced stack, he was able to dominate his table, and finished the day with 63,900 chips.

Yannick Autaa Emerges from Day 1B

French poker player Yannick Autaa emerged from Day 1B as the only other player to breach the 60,000 chip mark. Whereas Hinrichsen had chipped up gradually during the day, the size of Autaa´s chip stack was largely due to a massive pot won against Scott Seiver when Autaa (10♣ 10♦) caught the American bluffing with air. Chasing the two chip leaders are such notable players as Eric Baudry, Vanessa Selbst, Kevin MacPhee and November Niner Eoghan O’Dea, while top UK poker players James Mitchell, Roberto Romanello and Jerome Bradpiece are still in contention for some of the €740,160 up for grabs.

The Tale of Two Poker Players

Among the 667 eliminations from the tournament over the two Day 1s, were two legends of poker – Daniel Negreanu and Leo Boxell. Negreanu, who had boycotted many of the EPT London events because he did not like the late registration structure, decided that he was going “make a point” and leave it until the last minute to enter the WSOPE NL Hold´em tournament. When he arrived at his table with his bag of 3,000 chips, blinds had already risen to 75/150 and he was left with just 20 BBs. Tweeting to the world that he was a HUGE disadvantage, Negreanu shoved with A9 into AA and sulked off back to his hotel room to read philosophy.

Leo Boxell, by contrast, was still in contention on Friday night for the Australia and New Zealand Poker Tour (ANZPT) Darwin Main Event in Australia and, when he was knocked out, jumped on a plane and flew half way across the world to compete at the WSOPE. Sadly for Leo, he busted early on in the tournament and learned that he had narrowly been pipped at the post by Danny Chevalier for ANZPT Player of the Year. We wish Leo the very best of luck in the remaining tournaments at the WSOPE.

When Day 2 of the WSOPE €1,090 NL Hold´em Championship starts today, the first aim for many of the remaining players will be to get into the bubble. The top 81 players will receive a minimum of €1,843 with the 27 who are still competing come the close of play guaranteed a minimum of €4,508. The top chip counts heading into Day 2 are as follow:-