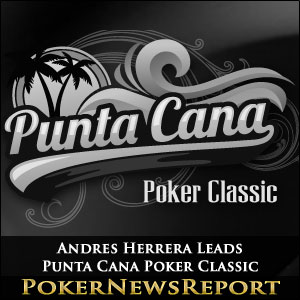 It was a nervous day for many of the 171 players who returned to play Day 2 of the $500,000 guaranteed Punta Cana Poker Classic at the Hard Rock Hotel and Casino in the Dominican Republic, knowing that only the top fifty players would cash in the event.

With blinds of 800/1,600 (ante 200) when the tournament resumed, twenty-seven of the players who had survived the two opening flights had less than twenty big blinds to work with, and almost in unison they began throwing their chips in the middle in hope of a vital double-up.

Jonathan Roy was one of the early beneficiaries of the “short-stack madness” – removing Hubert Dirks in the first hand of Day 3 after Roy´s K♦ 10♠ paired the Ten on the flop of 10♣ 8♣ 5♥ and Dirks (A♣ Q♣) failed to complete his flush draw. Thereafter the “madness” continued and, by the end of the first level of Day 2, thirty-six players had already busted.

The madness slowed down a little during Level 12 (blinds 1,000/2,000 – ante 200), but a further twenty-seven seats were left empty before the first break of the day; including that of the unfortunate Argentine Fernando Suaya, who reckoned he had found a good spot to shove with A♠ K♠, only to find one other player holding A♣ K♦, and a third with A♥ A♦.

Serda Moves into Chip Lead – until the Bubble

Overnight chip leader William Valladares had a pretty uneventful day, but still remains in contention with 105,000 chips; however the player who was ahead after Day 1A, Patrick “prepstyle71” Serda, enjoyed a far more active second day – “confusing people” during the early levels of play, and then “staying snug” when Jonathon Roy joined his table just before the dinner break and sat to his left.

At the dinner chip count, Serda had built his stack up to 640,000 chips and was the clear leader in the tournament at the time – but during the hand-for-hand session when the field was reduced to fifty-one players, he doubled-up a short-stacked player 6♥ 7♥ < K♣ K♠ after missing all his outs on the flop of 10♥ 7♠ 2♥ and finished the day less than one big blind behind chip leader Andres Herrera.

The Bubble Bursts and the Day Cut Short

Andres “gmcrafter” Herrera had chipped up nicely during the day – mostly at the expense of recent Uruguay Poker Tour winner Oded Minond and Panama´s highest ranked player Bolivar Palacios – and he bust Palacios out of the event during the mayhem with followed the bubble bursting (due to an excess of Latin testosterone!) to finish the day in the chip lead.

The bubble burst when Karlo Lopez was in for his last big blind with A♥ K♠. Jonathan Roy called the bet with 10♠ 10♣, and Roy´s pocket Tens were good even to eliminate Lopez and signal much jubilation between the fifty remaining players who were all assured of a $3,565 min-cash. The decision was then made to stop play for the day when the field reached 45 players – which happened with a couple of hands.