Italian Andrea Dato leads the way after Day 1a of the World Poker Tour (WPT) Venice €3,000+€300 buy-in main event at the Casino Di Venezia in Ca’Noghera. 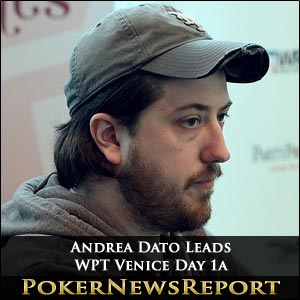 Italian Andrea Dato leads the way after Day 1a of the World Poker Tour (WPT) Venice €3,000+€300 buy-in main event at the Casino Di Venezia in Ca’Noghera.

What was disappointing for the event’s organisers is that just 78 players turned up for the first of two opening days – particularly following on from the incredible and record-setting 571 entrants for last week’s WPT Prague.

However, as this main event provides re-entries, organisers expect many of the first day’s eliminations to return for Day 1b, so we may well see players such as Sam El Sayed, John Eames, Marvin Rettenmaier, Nicolo Calia, Scott Baumstein, Giovanni Rizzo and the Speranza brothers, Alessandro and Gianluca, back at the felt today.

But it was Dato who emerged as the early front-runner in Vienna as he hopes to add to the $300,000 he has won from live events, including the $138,044 he picked up for finishing third at this summer’s event #12, a $1,500 buy-in Triple Chance No-Limit Hold’em tournament, of the WSOP.

Dato confirmed his position at the top of the leaderboard when winning a pot late in the day against Manuel Novello.

Luca Ascani, in middle position, raised to 2,000, before Dato three-bet to 5,600. Three other players, including Ascani and Novello, made the call to see a flop of A♥ {9c-4h.

With the action back on Dato after three checks, the Italian bet 6,800 with only small blind Novello making the call.

The 3♠ arrived on the turn and both checked. The 2♣ river saw Novello check to Dato, who then put another 10,600 into the pot. Novello looked worried but made the call anyway, only to see Dato reveal A♣ Q♥ for top pair.

Novello, looking more than a little embarrassed, was reluctant to show his hole cards and instead mucked them.

That pot took Dato above the 210,000 mark, while Novello – chopped back to 14,000 after that hand – and early chip leader Ascani hit the rail soon after.

Dato also finished in fifth place at last month’s Italian Poker Tour (IPT) Campione II €2,000 buy-in No Limit Hold’em main event for $62,264 in Cassin, so is most certainly no stranger to the pressures of live poker.

Top 10 placings chip counts after Day 1a of the WPT Venice main event:

Updates on day 1b will follow soon, at Poker News Report.