Andre and the French Take Control of EPT Deauville

After commenting yesterday on how poorly the French were performing in their own tournament, five French players now head the chip counts for the EPT Deauville. 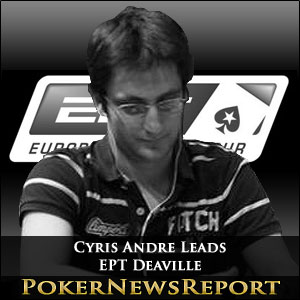 After commenting yesterday on how poorly the French were performing in their own tournament, five French players now head the chip counts for the EPT Deauville

French poker players bounced back on Day 4 of the PokerStars.fr-sponsored EPT Deauville Main Event, lead by Cyril Andre – the only player to finish the day with more than 2 million chips. Andre is being pursued in the race for the €770,000 first prize by nine of his compatriots – five of whom appear in the top ten chip counts – with just twenty-three players remaining in the tournament.

However, as Day 3 chip leader Shafaf “Da Boar” Hadaya will confirm, having a big chip lead counts for nothing if the cards run against you.

Hadaya lost much of his remaining chip stack when running K♠ K♥ into Gordon Huntly´s A♣ A♦ and was eliminated in thirty-second place with A♠ J♠ when, on a flop of Q♥ 3♠ 6♠, his hand failed to improve to better Yury Gulyy´s A♦ Q♦. However Hadaya was not the only player to see the cards run against him in Deauville.

Even before Shafaf Hadaya´s run of ill-fortune had started, Ionel Anton (A♣ 10♣ < 9♦ 8♦) and Ibrahim Ghassan (10♥ 10♠ < 9♣ 9♠) were both eliminated when their respective opponents hit a straight on the river. Matt Frankland was eliminated when his A♣ K♥ came second to Walid Habbib´s A♠ J♥ and the luck of the Irish deserted David Lapin who had his pocket Kings turned over by one of Aurelien Guiglini´s two outers.

The Rise and Rise of the French

Aurelien Guiglini finished the day fourth in chips after forcing Yury Gulyy out of a half million chip pot close to the end of the day, and is joined at the top of the leaderboard by Hugo Pingray – who flopped a diamond flush in a major pot against Matthieu Herve. Herve recovered from seeing his chip stack decimated and knocked out Massimo Di Cicco (10♦ 10♠ > 8♥ 8♦) in one of last hands of the evening to bounce right back up among the chip leaders.

Cyril Andre – who had started Day 4 in ninth position – had been building his stack quietly until an hour before the close of play. Then, in a hand against 2011 EPT Deauville Main Event winner Lucien Cohen, he jumped to the top of the leaderboard. Cohen (A♥ 10♣) called all three of Andre´s post-flop bets on a board of 9♦ 4♥ 2♦ / A♦ / 4♣ and was eliminated when Andre turned over 2♥ 2♠ for a flopped set and rivered Full House.

When play resumes on the penultimate day of the EPT Deauville Main Event, Andre will have a stack of 2,108,000 chips in front of him – twice the average of 1,020,000 and with almost an hour to play in Level 23 (blinds 10,000/20,000 – ante 3,000). Play will continue at the Deauville International Centre until just eight players remain from the twenty-three that will take their seats this morning, with the first person to be eliminated assured of receiving €23,000.