Brazilian Andre Akkari reckons it was his destiny to win a World Series of Poker (WSOP) bracelet after his father died recently – and so it proved last night in Las Vegas when the 36-year-old poker pro lifted the $1,500 No-Limit Hold’em title and $675,117. 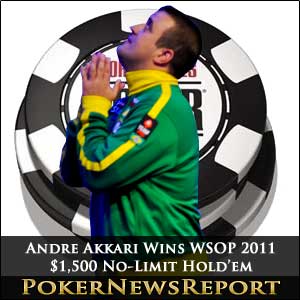 Brazilian Andre Akkari reckons it was his destiny to win a World Series of Poker (WSOP) bracelet after his father died recently – and so it proved last night in Las Vegas when the 36-year-old poker pro lifted the $1,500 No-Limit Hold’em title and $675,117.

Many final tables at the WSOP are, unfortunately, rather dull affairs. But that most certainly wasn’t the case at event #43 – and especially when Sao Paulo native Andre Akkari came up against American Nachman Berlin in their heads-up encounter.

Backed by an incredibly vociferous rail throughout, PokerStars Team Pro Brazil member Akkari – just the second Brazilian to secure a bracelet following Alexandre Gomes’ success in 2008 – secured his first piece of WSOP jewellery from an event that will go down in WSOP history as one of the most thrilling and fun ever witnessed.

Really, it’s hard to think of a more deserving winner as father-of-two Akkari – in his fourth WSOP – always appears to be smiling and never has anything bad to say about his opponents.

Brooklyn’s Berlin entered the heads-up clash with Akkari holding almost a 2 to 1 chip lead, but the Brazilian star believes the backing he received from his flag-waving and chanting supporters – aligned with his overwhelming feeling of positivity – meant he just HAD to succeed.

He was right, of course, but – following just over 60 minutes of heads-up play on day three – he was now down to a 3 to 1 chip disadvantage before the hard-stop rule halted his slide.

Akkari, however, admitted that if the 10 levels hadn’t been played out, he probably “would have lost the bracelet, (so) the break was very good for me”. It certainly wasn’t what 31-year-old poker pro Berlin wanted when he was on such a great run. But that’s how the WSOP functions these days.

Strangely, though, when play resumed on day four of this epic event, the atmosphere had calmed down somewhat as Akkari took several hours to close the gap on his opponent.

However, by the time the first session ended, Akkari was only 2 to 1 down. Still, he again slipped back, before doubling-up when his A-8 beat Berlin’s K-Q. Now level, Akkari’s pocket kings then saw him move ahead – much to the delight of his fans.

Incredibly, it was all over just a few hands later and Akkari had lifted a first WSOP bracelet and $675,117, with the gathered Brazilians going wild with happiness as their hero hoisted the gold bracelet high above his head in the Amazon Room of the Rio All-Suite Hotel & Casino.

The victorious Akkari immediately recalled how he had hit a lifetime low when hearing of his father’s death while playing the Latin American Poker Tour in Lima, Peru.

He had “finished day one third in chips, and I went to my room so happy because I had so many chips”. However, just an hour before starting day two, he “got a call from Brazil saying my father had passed away, so it was the worst day of my life”.

But, rather than assume nothing positive could ever happen to him again, the ever-optimistic Akkari “was pretty sure something good would happen here (in Vegas) this time – and it happened”.

So, after seeing off 2,855 other entrants, Akkari had to overcome one last hurdle in Berlin – and here’s how the final hand played out.

On the button, Berlin moved all-in for 1,920,000 in chips, with Akkari – who paused to eye up the American’s stack – making the call to show Kd-Jh. He was behind, though, as Berlin showed Ad-8d.

The railbirds – particularly the colourful and chanting Brazilians – looked on in anticipation as the dealer revealed a Ks-Qh-3d flop to give Akkari the lead.

The impossible now seemed probable as Akkari’s supporters erupted with joy. However, the pacing Akkari wasn’t quite ready to celebrate – until the Kh came on the turn and our winner was rushed off his feet by fans, including fellow pros Maria Mayrinck, Felipe Ramos, Gomes and Gualter Salles, as the dealer showed the unimportant 5s on the river.