According to the NY Daily News Poker pro Amnon Filippi is being allowed to remove one bracelet in the pursuit of a far classier one. 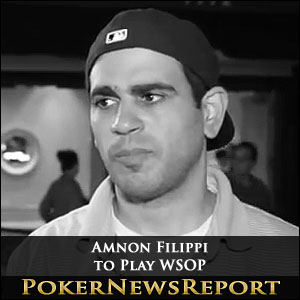 According to the NY Daily News Poker pro Amnon Filippi is being allowed to remove one bracelet in the pursuit of a far classier one.

Filippi was arrested in October 2012 and charged with felony conspiracy to distribute marijuana. Amnon was arrested along with two others when Federal Drug Enforcement agents raided a house containing over 100 marijuana plants.Filippi posed a $250K bond, surrendered his passport and was ordered to wear a monitoring bracelet at all times.

Prior to his arrest, Amnon was one of the circuits more successful poker pros, notching wins at the Bellagio Cup and final tabling the WSOP $50K H.O.R.S.E Championship, and the WPT Foxwoods Poker Classic. Filippi had five cashes at the 2012 WSOP. His career tournament winnings exceed $3 million.

Citing his need to continue earning a living, Amnon was able to convince NY Judge Ronnie Abrams to allow him limited travel to participate in poker tournaments. He has previously been allowed to remove his monitoring bracelet to travel to Borgata in November and to the Las Vegas in December. Each time, Amnon met the conditions of his travel. Filipe’s compliance with the terms of his travel and a reportedly flawless record of compliance with the other conditions of his probation, prompted Judge Abrams to grant permission for him to travel for WPT Events earlier this year, and to now grant permission for him to participate in the WSOP.

While Amnon has had an excellent run of luck in his negotiations with Judge Abrams, his run at the tables has not been on the same level. Amnon has only cashed once since his arrest in October, which was at an LA Poker Classic preliminary event. His Twitter feed yesterday continued the bad run. According to his Tweets, Amnon was dealt K♣ K♠ three hands in a row. On the first he lost to AA, on the second his opponent folded on the flop and he got a walk on the third. The result of the hitting the Kings an astronomically improbable three times in a row was a minus $1325.