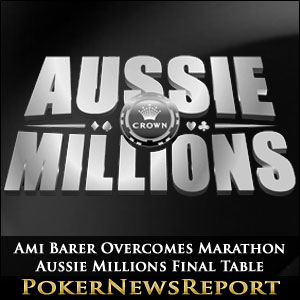 There was a fascinating conclusion to the 2014 Aussie Millions Main Event which was eventually won by Canadian Ami Barer – who had dominated the penultimate day of the tournament, hit freefall on the final table and then bounced back with a trio of eliminations to win the event.

Barer led the final table of seven going into the last day of the Aussie Millions Main Event courtesy of a string of high profile eliminations which included Jason Mercier 9♣ 9♥ > 7♥ 7♣ and Erik Seidel A♠ K♦ > K♥ 3♠, and had almost a third of the chips in play when the final table got under way at the Crown Poker Rooms in Melbourne.

None of the seven players were particularly at risk of an early elimination with blinds of 20,000/40,000 (ante 5,000) when play got underway in Level 25, and the pace of the play reflected that – with only minor action taking place throughout the opening level.

The following level saw Sorel Mizzi move into the chip lead when taking uncontested pots from Vincent Rubianes and Ami Barer (Jake Balsiger also got a stack of Barer´s chips when turning a Full House against Barer´s trip Deuces) and Scott Seiver ensured he would be around for a little longer when finding double-ups twice against Jake Balsiger A♥ J♦ > 10♥ 10♣ and A♥ K♦ > K♠ Q♠.

Action Picks Up Before Dinner

The third level of play saw considerable more action – and more woe for Ami Barer. Sorel Mizzi put a big dent in Scott Seiver´s impressive recovery when taking a big three-way pot from Seiver and Barer to extend his lead, before Barer got his Kings cracked by Darren Rabinowitz´s A♥ K♦ and then doubled up Scott Seiver K♦ K♣ > K♥ 8♥.

Scott Seiver was the first player to bust post-dinner – moving all-in with 8♥ 8♦ and finding a caller in Darren Rabinowitz (A♠ 10♦). The flop of A♥ J♥ K♠ put Rabinowitz ahead in the hand, but the Turn (3♥) gave Seiver the opportunity for a Flush draw. Unfortunately for Seiver, the J♣ on the River was a brick and he was sent to the rail in seventh place.

Ami Barer´s woes continued when he lost more than half a million chips to Sorel Mizzi´s pocket Eights, and Mizzi extended his lead further when eliminating Andrew Phaedonas in sixth place K♥ K♣ > Q♣ J♣ to take his stack beyond 7 million chips.

As the five remaining players moved into Level 29 (blinds now 50,000/100,000 – ante 10,000) the action slowed once again. Other than Vincent Rubianes picking the wrong moment to shove his K♣ J♣ into Darren Rabinowitz´s A♣ A♦ (Rubianes bust in fifth place), very little occurred to change the relative positions of the players.

Then Ami Barer came alive and started moving all-in against Sorel Mizzi. In a virtual replay of how he had demolished Erik Seidel´s stack on Day 4, Barer shoved three times into Sorel Mizzi – capturing the blinds and antes on each occasion and moving from being the short stack when four-handed play started up to having 5.7 million chips (Mizzi still had in excess of 8 million chips).

Ami Barer then took the Aussie Millions Main Event by the scruff of the neck – busting out both Darren Rabinowitz and Jake Balsiger to take the chip lead going into the heads-up. Rabinowitz´s elimination was a straightforward hand of 9♦ 9♠ > 5♦ 5♠, but the hand which eliminated Jake Balsiger in third place was far more dramatic.

Balsiger snap-called Ami Barer´s pre-flop shove and was a 70% favourite to double-up with K♣ K♦ over Barer´s A♦ 10♥ – a double-up which would have moved him into the chip lead. Balsiger´s odds of victory in the hand improved to 82% after the flop and Turn of 9♣ 8♥ 7♣ / 5♣, but the 6♥ completed the board – giving both players a straight, but Barer a better straight by virtue of his 10♥.

Following the eliminations of Darren Rabinowitz and Jake Balsiger, Ami Barer took 13,815,000 -v- 6,150,000 chip advantage into the heads-up against Sorel Mizzi; and that advantage was quickly extended when Barer flopped trip Sevens and got two streets of value from Mizzi.

Sorel Mizzi tried to battle back, but was constantly being forced out of pots by Barer´s dominant chip stack. The final hand of the 2014 Aussie Millions Main Event came deep into Level 31 (blinds 80,000/160,000 – no ante) when Mizzi moved all-in from the Big Blind for his last 3 million chips and was snap-called by Barer.

Mizzi´s supporters called for diamonds, but the flop of 2♣ K♠ 2♥ erased any hope of Mizzi being saved by a flush draw. The 3♥ on the Turn took away the chance of runner-runner Trips and the tournament was concluded when the A♦ was dealt on the River – Ami Barer had become the 2014 Aussie Millions Main Event Champion.