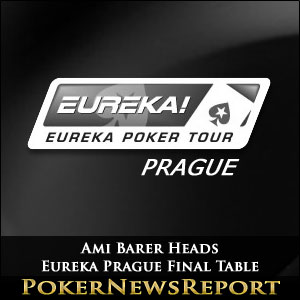 The penultimate day of the PokerStars-sponsored Eureka Prague Main Event was a memorable one – not least for Canadian poker player Ami Barer, who qualified for the tournament in an online satellite. Barer may be an unfamiliar name on the live poker circuit but, under the pseudonym of “Uhhmee” on PokerStars and Full Tilt Poker, he has more than $5.5 million in lifetime earnings.

Yesterday Barer displayed the skills he shows on the virtual felt to chip up to 7,280,000 chips at the close of play – more than 2 million chips ahead of his closest rivals Stephen Chidwick (4,955,000 chips) and Dmitri Holdeew (4,722,000 chips) with the remainder of the field languishing a fair distance behind. When Barer takes his seat at the final table today, he will have 121 Big Blinds to play with.

Day 3 of the Eureka Prague Main Event started with forty-three players and some important double ups for a couple of the shortstacks – David Lappin and Chris Moorman. Unfortunately Lappin´s double-up did him no lasting good, as he was bust in 42nd place (Aces > A♣ 9♣), but a second double-up against Milan Simko (J♣ 8♣ flush > flopped set of Nines) enabled Chris Moorman to move up among the chip leaders.

Matthias de Meulder and Kevin MacPhee failed to make the good start they needed to get competitive (bust in 28th and 27th places respectively), but the last remaining member of Team PokerStars Pro – Marcin Horecki – chipped up substantially due to winning an exceptional hand in which he was all-in with K♦ Q♦ against the A♠ A♦ of Malte Monnig and the A♣ K♥ of Mindaugas Simkas. The board ran 9♥ 4♣ K♠ / Q♥ / 6♥ to move Horecki into contention for a seat at the final table.

By the start of Level 25 (blinds 25,000/50,000 – ante 5,000), just sixteen players remained, and the complexion of the game changed dramatically with some big pots being won and some significant KOs. Marcin Horecki was the first player over 3 million chips when his 4♥ 4♣ held on against Martin Mulsow´s (J♣ 10♣) missed flush draw, and then Ami Barer leapt up to 6 million chips when he bust out Lasell King.

Dmitri Holdeew enjoyed some very good luck to bust out Idan Raviv A♠ K♥ > A♣ A♥ when he flopped one King and rivered a second; and Chris Moorman was eventually eliminated in twelfth place by Stephen Chidwick A♠ 5♣ > K♥ 6♥ after all the chips had gone in on the flop of 5♠ A♣ Q♥. Moorman missed his Flush draw and Stephen Chidwick joined Dmitri Holdeew in the four million chip club.

Stephen Chidwick was also the beneficiary of a missed flush draw when his A♠ A♣ held against Joshua Hunt´s K♦ Q♦ (on the flop of 6♠ 7♦ J♦), and the final table of eight was set when Sergey Baranov moved all-in pre-flop with 10♥ 9♦, and failed to improve past Jaroslav Peter´s pocket Threes.

Looking Ahead to the Eureka Prague Final Table