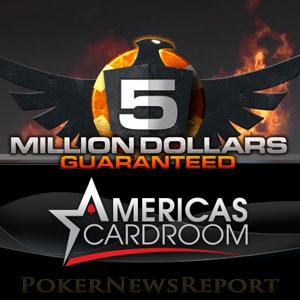 Yesterday afternoon, Americas Cardroom hosted its third Million Dollar Sunday of the year. The million dollar guaranteed tournament received an incredible 1,939 entries, meaning that although there was an overlay of $30,500, the site still turned a profit once the entry fees had been accounted for.

The success of the event prompted the site to confirm a rumor that had been circulating from last Friday, that there would be five more million dollar events throughout the fall – one to be played on Sunday September 13th, with the other four being hosted back-to-back from Sunday October 4th.

Americas Cardroom also confirmed that it would be continuing its “Million or Bust” Jackpot poker promotion – a three-handed hyper-turbo Sit & Go in which players can qualify for the million dollar events for just $12.00 – and hosting a comprehensive satellite schedule which includes “On Demand” Sit & Go games, mega satellites and monster satellites offering seats into the target event.

Yesterday´s Million Dollar Sunday got underway on time at 3:00pm with eight hundred players – mostly qualifiers that had won their seats through Americas Cardroom´s comprehensive satellite schedule and promotions. By the time late registration closed at 8:00pm, there were 1,939 entries from 1,463 unique players.

A chop of the remaining prize money was agreed (after a little confusion), and an intriguing heads-up encounter ensued – “Ra1syDa1sy” winning an hour later when he paired his K♠ 9♦ on the two-heart flop and “TALKINABOUT?” (J♥ 5♥) missed his heart flush draw.

On Saturday, several players complained that they could not access the cashier page or their rewards page through the Americas Cardroom poker client. It transpired that a compatibility issue existed between the Americas Cardroom client – which defaults to the Internet Explorer browser – and Windows 10, which uses the new “Edge” browser.

A temporary solution to the problem is to uninstall the Americas Cardroom software and reinstall it again; but hopefully the site is going to do a software upgrade in the near future to account for this issue so that the cashier and reward pages open up in the player´s default browser. Also hopefully the site may soon get around to releasing the long-promised Mac version of its software.

Fancy Winning a Million this Fall?

If you are not already playing at Americas Cardroom, there are five million reasons why you should be this fall. In addition to the forthcoming Million Dollar Sundays, Americas Cardroom has the biggest US-facing weekend tournament – the $115,000 guaranteed Sunday Special – and a host of other promotions and special events to make your experience at the site especially lucrative.

Cash game players are particularly well catered for at Americas Cardroom with the weekly “Beast” Rake race and the most rewarding of all US-facing VIP rewards programs. You can find out more about the “Beast” and the Elite Benefits VIP program in our [geolink href=”https://www.pokernewsreport.com/americas-cardroom”]review of Americas Cardroom[/geolink]; or just visit the site today and make your first deposit using the Americas Cardroom bonus code [bonuscode room=”americascardroom”] to take advantage of a 100% match first deposit bonus of up to $1,000.