If you have been looking for a value way of entering the 2015 WSOP Main Event, look no further than Americas Cardroom´s new satellite route. 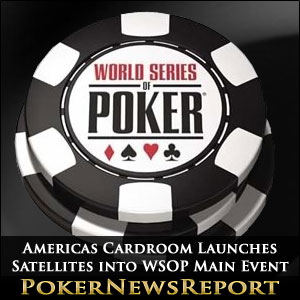 If you have been looking for a value way of entering the 2015 WSOP Main Event, look no further than Americas Cardroom´s new satellite route.

The recent release of the [geolink href=”https://www.pokernewsreport.com/wsop-2015-schedule-includes-online-bracelet-event-17675″]2015 WSOP schedule[/geolink] has stirred significant interest in the summer events at the Rio All Suites Hotel and Casino, and Americas Cardroom has been quick off the blocks to offer players a potentially lucrative satellite route into the Main Event.

This year´s WSOP Main Event is somewhat special inasmuch as organizers have said a minimum of 1,000 players will cash in the event if at least 5,000 enter the tournament and – provided the total entry beats last year´s 6,683 players – each of the November Nine will be guaranteed a minimum cash of $1 million.

How to Win Your Seat in the 2015 WSOP Main Event

Americas Cardroom is hosting special WSOP Main Event qualifiers starting from February 22nd @ 6.00pm (ET) – incidentally the same day as the site´s $1 million guaranteed “Winning Millions” tournament. The satellite tournaments have unlimited re-entry and late registration for two hours (8 levels) and players start with 5,000 chips. Due to the fairly steep blinds structure, players who leave it until the last possible moment to enter will only have sixteen big blinds to play with.

The qualifier has a buy-in of $55.00 and the top five players will win a package which includes the $10,000 buy-in to the WSOP Main Event and $2,500 spending money. Each of the WSOP satellite tournaments is sure to be well contested, for as well as being able to buy-in directly, players who finish in the prize positions in Americas Cardroom´s “Beast” and “Sit n Crush” promotions will be awarded free seats into the satellite event as part of their prize.

About the Beast and Sit n Crush Promotions

The Beast and Sit n Crush are both weekly, non-contributory leaderboard competitions that run from Saturday through to the following Friday. The Beast is a particularly lucrative cash game promotion as it awards thousands of dollars in cash prizes to over 100 players each week and tournament tickets to more than 150 players. Throughout February, Americas Cardroom is adding $20,000 to the Beast prize pool, evenly distributed in units of $1,000 to the top twenty players.

The Sit n Crush promotion is a similar type of competition with points on the leaderboard being awarded for competing in Sit n Go games irrespective of where players finish in each game. Players with smaller bankrolls are heavily favored by the terms of the promotion as are those who can play outside of peak times or start “On Demand” Sit n Go games – games which start when a pre-determined number of players has registered and then continue like a multi table tournament.

[isGeoAllowed]Further details of the Beast and Sit n Crush promotions can be found in our [geolink href=”https://www.pokernewsreport.com/americas-cardroom”]review of Americas Cardroom[/geolink].[/isGeoAllowed]

Where to Find the WSOP Satellites at Americas Cardroom

The satellite route into the 2015 WSOP Main Event is just one of a series of reasons to play at Americas Cardroom in the coming months. As well as the $1 million guaranteed “Winning Millions” event on February 22, Americas Cardroom frequently hosts “The Cage” – a nosebleed cash game with a tournament format that has a buy-in of $5,100 – and will be starting its Online Super Series of poker tournaments from February 13.

Don´t miss out on your chance to play in the 2015 WSOP Main Event – visit Americas Cardroom today!