Americas Cardroom has made changes to its recent software upgrade to include several new features – including “On Demand” SnG and MTT tournaments. 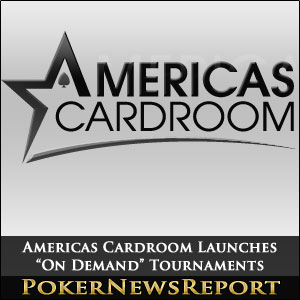 Americas Cardroom has made changes to its recent software upgrade to include several new features – including “On Demand” SnG and MTT tournaments.

Players logging into their Americas Cardroom accounts this week will notice a new style of tournament appearing in both the Sit n Go and Multitable Tournament lobbies – “On Demand” tournaments.

On demand tournaments start like Sit n Go games when a minimum number of players have entered the tournament, but then a late registration period allows new players to join the tournament and increase the prize money – as well as enabling players who have bust from the game to re-enter.

The game style has already been tried out on Full Tilt Poker with a reasonable level of success and, in order to encourage players to try the games out, Americas Cardroom is offering its initial “On Demand” tournaments with guaranteed prize pools.

For example, a typical $0.55 buy-in “On Demand” Sit n Go game will offer a $25.00 guaranteed prize pool but will start when 18 players have entered the tournament (potential overlay $16.00). However, late registration will stay open until the end of Level 6 (one hour), and many games have seen the total number of entries exceed 100 – doubling the prize pool and paying eighteen places.

The site is also hosting $10.00 freeroll “On Demand” tournaments as a carrot for players to try the games out. These start once 270 players have registered for each event and, once the games are underway, they have synchronised breaks every hour like a regular multi table tournament.

In addition to Americas Cardroom´s “On Demand” tournaments, several other improvements have been included in the “upgrade to the upgrade”.

There has also been a slight change to the visual features on the cash game tables. Americas Cardroom allows the player under the gun (the player to the left of the Big Blind) to straddle; i.e. pay a third blind – double the amount of the Big Blind – to take the Big Blind´s position which has the effect of increasing the minimum bet/raise for the remainder of the hand.

Previously, straddle bets could have been confused as UTG raises, but now a notification box appears whenever a player is straddling to advise the other players that a straddle has been applied and allow them to size their bets accordingly – for example, at a $1.00/$2.00 NL Hold´em table, the player UTG pays a straddle of $4.00 (before they have seen their cards) and the subsequent action around the table has to be in multiples of $4.00 rather than $2.00 ($8.00 after the Turn and River).

If you are not playing at this poker room yet, you might want to check out our 2013 Americas Cardroom review here.