Americas Cardroom is launching a promotion which rewards players with gems that can be used in the incredibly successful mobile Clash of Clans game. 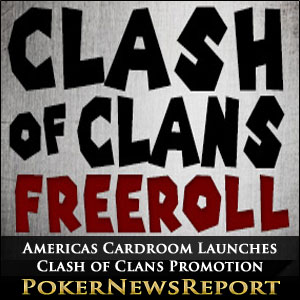 Americas Cardroom is launching a promotion which rewards players with gems that can be used in the incredibly successful mobile Clash of Clans game.

Americas Cardroom has a history of inventive and innovative promotions and its latest “Clash of Clans” freeroll promotion promises to attract a breed of poker player who enjoys using guile and strategy to crush his (or her) opponents – so most poker players then!

The promotion consists of ten freeroll tournaments played between July 23rd and August 10th (the schedule for these events is below) in which the top five players will each be rewarded with “Gems” – the official currency of Clash of Clans” – which can then be used to buy resources to finish upgrades or increase a hero´s healing rate.

If You Don´t Know about Clash of Clans …

Clash of Clans is an epic multiplayer combat strategy game (similar to “Civilization” if you are an old person) in which the aim is to develop your village into an impregnable fortress and do battle with other players worldwide – or join together with other players to form the ultimate clan when that course of action suits your strategy best.

Although the game is free to play, “Gems” can be purchased in the Apple and Google apps store to accelerate your progress, access restricted levels and purchase special power-ups. Clash of Clans is one of the most successful mobile games ever – having been downloaded almost 5 million times – and, if you have not tried it yet, now if the time to enter Americas Cardroom “Clash of Clans” freeroll promotion to gain an edge of your opponents when you start with up to 25,000 Gems (worth $209.90!).

How the Promotion Works

Americas Cardroom “Clash of Clans” promotion is exceptionally straightforward – consisting of ten freeroll poker tournaments on selected dates up until August 10th. The top five players in each tournament will win 2,500 Gems, so it is possible to collect a total of 25,000 Gems if you compete in all ten tournaments and “cash” in each one.

There is no buy-in or re-buys for the freeroll tournaments, and no deposit required before you can participate in the Clash of Clans promotion. If you are not already registered with the site, simply download Americas Cardroom and go to “Tourney” > “Freeroll” to find the list of available tournaments.

In each of the freeroll tournaments, you will start with 2,000 chips. Build on these throughout the 7-minute levels and survive until just 5 players remain, and you will win 2,500 Gems to increase the chances of becoming the clan leader of a master clan!

You can participate in the Americas Cardroom “Clash of Clans” promotion at the following times:

One Reply to “Americas Cardroom Launches Clash of Clans Promotion”