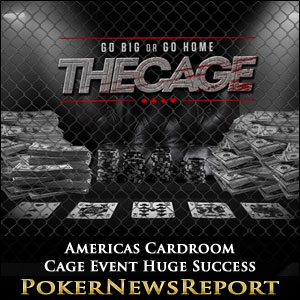 Sixty-six players either qualified for the event through Americas Cardroom´s extensive satellite program or bought in directly for $5,000, meaning that there was $330,000 in cash on the tables during the three hour game – an incredible amount of money for any player that had qualified into the event for as little as $1.50!

Thirty-nine players survived the three hours of action, with twenty-five clearing a profit. Best performance of them all was by “bik6624235”, who finished the night with $29,947 after rivering a set of Tens to crack the pocket Aces of “WhosGotItBetter” (you can watch a replay of the hand here).

Other big winners included “UpayformyKia”, who can afford a better car after exiting the cage with $20,921, “vasya9” who completed the three levels with $15,556 and “Fruits_of_Fib” – who also managed to triple his stacking stack to finish with $15,429.

The success of the first ever Cage Event took everybody by surprise. Just hours before the cards were due to be in the air, emails were circulating celebrating the fact that four more players had qualified in the last of the weekly satellite finals to bring the number of qualifiers up to thirty-nine.

ACR executives were speculating that prize pool for the Cage had the potential to reach $250,000, but it is doubtful that even in their wildest dreams Americas Cardroom would have expected twenty-seven more direct buy-ins to take the prize pool beyond $300,000.

Although Americas Cardroom has not officially announced “The Cage Mark II”, the poker client already shows a second Cage Event scheduled for November 12. Sub-satellites, Sit n Go satellites and the Weekly Satellite Final (moved back to Wednesdays) also show in the tournament lobby.

Judging by the success of the initial promotion, “The Cage” could become a regular feature in Americas Cardroom schedule and attract more high stakes players to its tables. The site also has ambitious plans to increase the value of its tournaments and is half way through its “Winning Millions” promotion which culminates with a $1 million guaranteed tournament on December 14.

Americas Cardroom plan to host an online poker tournament on December 14 which has a $1 guaranteed prize pool. The $540 buy-in tournament was announced back in July and, to date, 128 players have qualified for the tournament which guarantees the winner a minimum cash prize of $200,000.

Satellites for this event start at freeroll level (with paid for add-ons and re-buys) and go through all the buy-in levels up to a $100 nightly super-satellite. Players can also win seats to a $50.00 super-satellite by finishing in a high position on Americas Cardroom´s Sit n Crush promotion or by exchanging their Combat Points in ACR´s online store for tournament bucks to buy-in directly.

Americas Cardroom has also recently launched a promotion called the “Millionaires´ Club” in which players making a small deposit into their accounts ($10 for new players/$25 for existing players) can claim a seat in the “Making Millions” tournament simply by collecting 13,000 Award Points between now and December 14.

For more information continue reading in our Americas Cardroom review