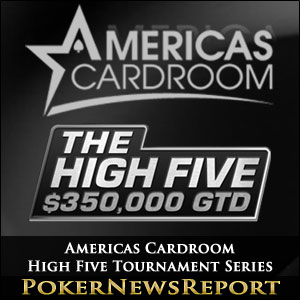 Americas Cardroom has announced a 25 event series scheduled for the middle of November, with a super satellite “passport” tournament being hosted this weekend.

The highlight of the series is the $200.00 + $15.00 buy-in NL Hold´em Main Event – which is scheduled to get underway at 5.00pm on Sunday 24th and has a guaranteed prize pool of $150,000 – and the twenty-four complimentary events include tournaments with buy-ins from just $3.30 and played in a variety of formats from hyper-turbo to mega stack, and from 4-Max NLHE to KO Pot Limit Omaha.

Satellite into the Primary Events this Weekend

This coming Sunday (3rd November), Americas Cardroom is hosting a super satellite “passport” tournament which is offering a prize of buy-ins into six of the highest valued tournaments within the “High Five” series. The super satellite “passport” tournament has a buy-in of $50.00 + $5.00, gets underway at 6.00pm (ET) and has a minimum prize of four buy-in packages to the following events:

Americas Cardroom is hosting freeroll events at 1.00pm (ET) each day with a seat up for grabs into the nightly $5.50 buy-in “Passport” re-buy and add-on satellite (played on Americas Cardroom at 6.30pm ET) which guarantees two seats for Sunday´s big game.

Don´t Worry if you Forget Your Passport!

If you forget about Americas Cardroom´s “Passport” tournament, or just cannot participate in it this weekend, three satellites into the High Five Main Event are hosted each day on the site, with satellites to the other High Five tournaments also scheduled throughout the weeks leading up to the start of the series.

Americas Cardroom has also recently undergone another software update, making the playing experience even more satisfactory for players on the site, and is currently offering a $200.00 reload bonus for existing players until November 3rd (please use the following reload bonus code for Americas Cardroom: “THEBEAST”), while new players to the site can take advantage of a 100% match bonus on first deposits up to $1,000 when they use the Americas Cardroom bonus code “[bonuscode room=”americascardroom”]”