The American Gaming Association (AGA) has filed a brief opposing PokerStars´ purchase of the Atlantic Casino and re-entry into the US online poker market. 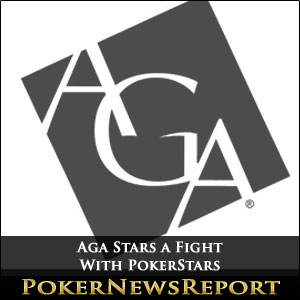 The American Gaming Association (AGA) has filed a brief opposing PokerStars´ purchase of the Atlantic Casino and re-entry into the US online poker market.

The brief, which was filed yesterday with the New Jersey Casino Control Commission and Division of Gaming Enforcement, claims that PokerStars´ parent company – the Rational Group – is a business built on deceit, chicanery and the systematic flouting of US law.

It goes on to say that Any action allowing PokerStars to be licensed would send a damaging message to the world of gaming, and to the world beyond gaming, that companies that engage in chronic lawbreaking are welcome in the licensed gaming business.

This is not the first time the AGA – who represent the interests of major casino companies as well as most casino industry game providers – has tried to block the threat of competition from PokerStars and their re-entry into the US online poker market.

Caesars Entertainment – who operate a third of the casinos in Atlantic City – lobbied New Jersey senators unsuccessfully to bar PokerStars from the recently passed legislation allowing online gaming but did manage to introduce a “bad actor” clause into Nevada´s hastily passed interstate online poker bill which will see PokerStars´ excluded from operations in Nevada until 2018.

PokerStars spokesman Eric Hollreiser issued a statement soon after the news of the brief broke, disconnecting the company from the issue and passing the ball to the New Jersey Casino Control Commission and Division of Gaming Enforcement. He said:

These are matters for expert regulators to determine, not self-interested partisans picking a public fight. The U.S. Department of Justice has said PokerStars is suitable to apply for a license in the U.S. and saw fit to give us the assets of our largest competitor and entrust us to compensate their customers outside of the U.S.

We will continue to work with authorities including the NJ regulators and other interested state regulators to discuss our qualifications and allow them to comment on what they find.

PokerStars is one of the largest and most respected internet gaming companies because we work closely with regulators and are in good standing with governments around the world, holding licenses in France, Germany, Italy, Spain, Denmark, Estonia, Belgium, Malta and Isle of Man. We will continue to work positively with regulators in New Jersey and elsewhere whenever they review our qualifications.

If the AGA´s objection to PokerStars´ purchase of the Atlantic Club is successful, it would place 2,400 jobs at risk. PokerStars´ $50 million purchase of the casino is subject to the passing of New Jersey´s online gaming legislation and acquisition of a license to operate online poker within the state.

On hearing the news, Atlantic City Senator Jim Whelan attacked the actions of the AGA and Caesars attempts to derail the competition.

They are motivated by greed and want to keep foreign investors out” he stated. “I´m fed up with these guys and their “’holier than thou crap’.