As was widely expected, shareholders of the Amaya Gaming Group Inc yesterday voted in favour of the $4.9 billion deal to take over PokerStars and Full Tilt Poker 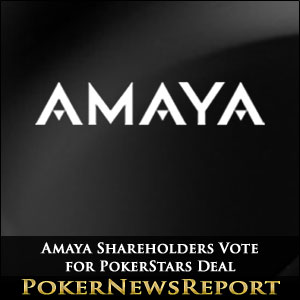 As was widely expected, shareholders of the Amaya Gaming Group Inc yesterday voted in favour of the $4.9 billion deal to take over PokerStars and Full Tilt Poker

In an extra-ordinary general meeting held yesterday at Amaya´s headquarters in Pointe-Claire, Quebec, all the resolutions related to the company´s proposed acquisition of Oldford Group Ltd (the parent company of the Rational Group – who own PokerStars and Full Tilt Poker) were approved by the company´s shareholders.

Key to the success of the deal´s completion was a resolution creating a new class of convertible preferred shares and warrants that will be transferred to the institution funding the deal – GSO Capital Partners. This resolution was passed unanimously, and the company (who also changed its name to Amaya Inc during the EGM) will now be able to move towards completing the takeover.

It´s Been a Good Week for Amaya

The rubber-stamping of Amaya´s proposed takeover of PokerStars comes at the end of a good week for the company. Last Thursday the French regulatory authority ARJEL approved the switch of ownership – stating that a change of indirect control does not change PokerStars´ technical, economic and financial capacity to carry out its activity – and the Toronto Stock Exchange gave a conditional green light for Amaya to issue the preferred shares and warrants to finance the transaction.

It has also personally been a good week for Amaya´s CEO David Baazov, who made a good impression at the Global iGaming Summit and Expo (GIGse) in San Francisco when discussing time-based entertainment value – an indication that Amaya intends to focus on recreational players – and he was also warmly welcomed by members of the 2+2 poker community when he created an account to join the discussion about Amaya´s acquisition of PokerStars.

Following the conclusion of the EGM, a press release was issued by Amaya Inc in which Baazov extended his appreciation to the company´s shareholders for their overwhelming support of the acquisition of the Rational Group; however, in a brief interview after the meeting he admitted that the hard work lies ahead – As hard as you feel you’ve worked historically in M&A (mergers and acquisitions) and until you get the transaction done, the hard part always comes after it’s done.

In many observers´ eyes Baazov was referring to the approval required by regulators to the change of PokerStars´ ownership. In addition to the French operating licence, Amaya´s acquisition of PokerStars will have to be approved by regulators in Spain, Italy, France, Denmark, Belgium, Bulgaria and Estonia; there is a deadline of the 16th September for Amaya´s licence application in the UK and ongoing talks with New Jersey´s Division of Gaming Enforcement in addition to Baazov actively lobbying to be involved in California´s proposed legislation.

Amaya Stocks on a High after Shareholder Vote

The news of Amaya Inc getting clearance to complete the acquisition of the Rational Group was pre-empted by a surge in the company´s share price – which traded at over CAD$30.00 before closing at CAD$29.61 – an increase of 330% over twelve months ago. Analysts believe that the price of Amaya´s openly traded shares could reached as high as CAD$35.00 following the shareholders vote – a clear sign that the money markets have confidence in the future of PokerStars and Full Tilt Poker.