In a deal reported to be in the works for quite some time, Canada-based Amaya Gaming has acquired the Ongame Network from Bwin.party for €25 million. 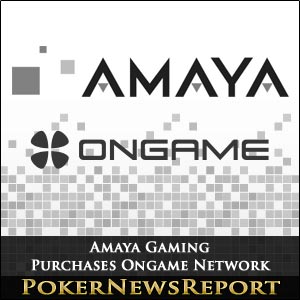 In a deal reported to be in the works for quite some time, Canada-based Amaya Gaming has acquired the Ongame Network from Bwin.party for €25 million.

The agreement calls for an initial payment of €15 million ($19.3 million), with additional payments over the next five years up to €10 million ($12.9 million) that is dependent on how widespread online gambling becomes in the United States during that time. The exact payment amount will take into consideration the number of states that legalize Internet gambling, as well as the population covered. The Ongame Network currently ranks fifth in worldwide player traffic.

Shuffle Master reached an agreement with Bwin.party to purchase Ongame in March for €19.5 million that also included a provision for further payments up to €10 million over five years pending the commencement of legalized, real-money online poker in the U.S. However, Shuffle Master decided to pull out of the deal three months later citing a declining European market and an uncertain regulated Internet gambling market in the U.S.

Amaya hopes to expand its reach in the European and American markets and looks forward to unleashing Ongame’s technology to its full potential through the leveraging of our many B2B relationships and delivering new partners and players to the network, said company CEO David Baazov. We’re excited about the wide range of opportunities this acquisition makes possible for us as we execute on our vision.

The Amaya Gaming Group was founded in 2004 and provides online and mobile casino gaming platforms worldwide through its Montreal headquarters. Bwin.party is the result of a merger between Bwin Interactive and Party Gaming last year. Bwin operates a poker skin on the Ongame Network that is scheduled to migrate to the PartyPoker site prior to finalization of the acquisition agreement.

The sale of Ongame conforms to our strategy, especially as we move closer to launching our single, proprietary technology platform in the next few months, Bwin.party co-CEO’s Norbert Teufelberger and Jim Ryan said in a statement. We believe Ongame will fit well into Amaya Gaming and has an excellent future ahead.