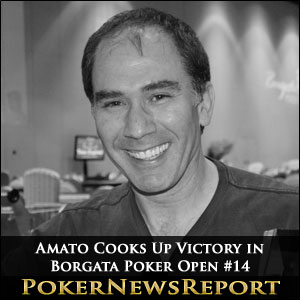 The Borgata Poker Open´s Event #14 was a “Semi-Turbo” No Limit Hold´em Re-Entry tournament which had 15 minute blinds for the first twelve levels, extending to 30 minutes thereafter. The 178 players who ponied up the $350.00 + $50.00 buy-in were each given 25,000 chips and consequently, when the final table of ten was set, there were some well stacked players among them.

Leading the race for the first prize of $18,128 was David Inselberg, who – in consecutive hands – had found pocket Kings to bust Egardo Rosario (A♣ 2♣) in fourteenth place and pocket Aces to bust Grace Sun (J♣ 8♣) in thirteenth place. However, his tough final table included WSOP Circuit regular Wade Woelfel and runner-up in Borgata Poker Open Event #8 – Andrew Jeffrey.

The usual course of events in Borgata Poker Open tournaments this week has been that the short stacks bust out early and then the players at the top of the leaderboard battle out the top prizes, but in Event #14, almost the opposite happened. Antonio Amato got a nice double up against Wade Woelfel and then bust out Joe Opie (A-Q > A-5) before Diego Lomanto doubled up Woelfel and was then eliminated by Chris Capone.

Mark Vogler chipped up in the first level of the final table (blinds 20,000/40,000 – ante 4,000) to have enough chips to call and bust Bill LaPointe in eighth (A-K > A-5), but Chris Capone was ultimately to be sucked out by Andrew Jeffrey (A-5 > A-9) to fall in seventh. After flirting with elimination on several occasions, Zaur Marnedov was bust in sixth by Antonio Amato (5-6 > A-3) and the game went four-handed when Mark Vogler missed his Spade flush draw and was sent from the table by Andrew Jeffrey (A-Q > K-5).

Andrew Jeffrey stamped his authority on Event #14 of the Borgata Poker Open as the blinds went up to 30,000/60,000 – ante 5,000. First he crippled former chip leader David Inselberg 9-5 > A-8 when flopping a Five on the River, and then won the last of Inselberg´s chips to take 2.3 million chips into three-handed play against Wade Woelfel (1.3 million chips) and Antonio Amato (850,000 chips).

Wade Woelfel (Q♠ 3♥) took a chance on hitting a gutshot draw when getting all his chips in on a flop of J♦ 8♣ 10♣, but it was Andrew Jeffrey (A♠ 7♣) who made a straight on the Turn of K♣ and River Q♥ to eliminate Woelfel in third – incredibly for his eighteenth lifetime cash in a Borgata poker Open event – and take a 4:1 chip advantage into the heads-up.

Antonio Amato Upsets the Odds (and Jeffrey at the same time)

For the second time in three days Andrew Jeffrey took a substantial chip lead into the heads-up climax of a Borgata Poker Open event – and for the second time in three days luck deserted him. The pivotal hand on this occasion was when Amato was at risk with K♣ J♦ against Jeffrey´s A♥ 9♥. The flop of Q♦ 9♦ 3♥ paired Jeffrey´s Nine but gave Amato the chance of a gutshot straight – which he hit when the 10♥ was dealt on the river.

In the final hand of the encounter, Jeffrey´s got the last of his chips in with pocket Fives against Amato´s A♠ 8♣. The game was over as a contest when Amato connected with an Eight on the Flop and then, to rub salt into Jeffrey´s wounds, Amato hit Trips on the River.

While Amato was celebrating with his supporters, Jeffrey commented to get this close and not get the trophy sucks. Amato – when he came down from the exhilaration of winning his first major poker tournament – said It feels really good. I like the fast structure.