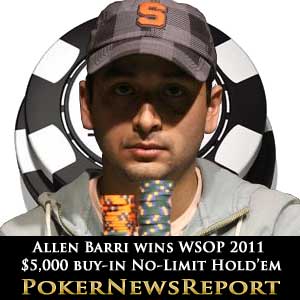 Allen Bari declared “I’m the best” a few moments after emerging from a field of 865 competitors to lift the $5,000 no-limit hold’em title at the World Series of Poker (WSOP) in Las Vegas last night and secure a gold bracelet and $874,116.

Bari, from West Orange in New Jersey, held off the challenge of Maria Ho – the first woman to make a final table at this year’s WSOP with $540,020 – as the pair got down to heads-up action to claim his first WSOP victory, and biggest cash win ever, that takes him to approximately $1.7 million earnings from live poker events.

The 26-year-old – who worked with AIG and Morgan-Stanley on Wall Street before being made redundant due to the recent economic recession – reckons that his “swagger” is deserved.

The Rutgers University graduate said that, as he has “been playing poker a long time” – since high school – and has “been working hard at it….putting in the hours and learning”, he does not reckon he is “arrogant in terms of everything – just poker” because he is “just better than most people”.

Now in his sixth year of attending the WSOP, Bari – whose big breakthrough came in 2008 at the WSOP Circuit, when he won the main event at Caesars in Atlantic City – lived up to his own hype.

Certainly, he wasn’t ever really troubled at the final table, having amassed about two-thirds of the chips when just four players were remaining.

The final hand saw Ho – who was massively outchipped by about six to one – find A-4 to get all her chips in against Bari’s eights. With the board running blank, however, Bari emerged victorious.

Six-year pro Ho, meanwhile, was disappointed with her runner-up spot, as, although she “won a lot of money and should be proud”, the 28-year-old from Arcadia in California stated that “there is a point in every poker player’s career where you want that bracelet” because “it’s so tough” getting to a final table.