Allan Stays Ahead Throughout Day 2 at the APPT Snowfest

Australian Dave Allan maintained his lead at the top of the APPT Snowfest in Queenstown but could face a major challenge from David Zhao. 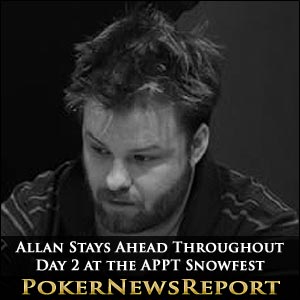 Australian Dave Allan maintained his lead at the top of the APPT Snowfest in Queenstown but could face a major challenge from David Zhao.

Anybody who was not pre-warned about the structure of Day 2 of the PokerStars-sponsored APPT Snowfest Main Event might have wondered what the hell was going on. Only half the survivors from the three Day 1s initially turned up to play at the SkyCity Casino in Queenstown and, after three levels of play, they cleared off and the other half arrived – only from the survivors from the early session to come back and join in the fun four hours later.

Of course, it was all planned like that because of the seating capacity of the SkyCity Casino and the record-breaking number of players who entered the event and the unusual format of Day 2 was largely appreciated by the players – those who survived the first flight grateful for a four-hour break between shifts, while those starting Day 2B pleased to effectively having half a day off.

43 players from Days 1A and 1B, including both day´s chip leaders – Dave Allan and Ken Demlakian – took their seats in the first flight of action, and it was Allan who initially performed the better of the two – getting to the break with 163,000 chips. However, his massive chip stack was only good enough for third place at the break as Michael Kanaan (200,000 chips) and Dave Wonson (175,000 chips) took advantage of some good fortune to respectively eliminate WSOPE Bracelet winner Andrew Hinrichsen and last season´s APPT Snowfest Team Event winner Glen Maiden.

Flight 2B was comprised of the remainder of Day 1B survivors and the field remaining from Day 1C. Although being much closely matched in chip stacks, it did not stop the eliminations from cascading in quick succession. During the first two levels we lost Canadian Ami “UhhMee” Barer – winner of almost $4 million online – and dual APPT Melbourne/ANZPT Perth winner Leo Boxell; and although Day 1C chip leader – Nurlan Boobekov – survived a roller-coaster ride throughout the afternoon, when the two flights amalgamated for three further levels of play, he had been reduced to just 25 big blinds.

Drawn together, Dave Allan and Dave Wonson started to make waves – Allan first taking 45,000 chips from Wonson in a hand that had seemingly limitless post-flop outs, only for Allan to win the hand with a pair of 8s – while Day 1B chip leader Ken Demlakian put his Day 1C equivalent Nurlan Boobekov out of his misery by turning an Ace flush in an Aussie -v- Aussie race. While the challenges of Kanaan and Wonson wilted, Allan and Demlakian continued to run well during the final level of the day – Allan turning a heart flush to bust Justin Huege de Serville´s set of Aces while Demlakian slow-rolled a set of Threes in a four way pot to bust Antonin Duda. However, the biggest leap up the leaderboard came in the very last hand of the day and was made by 2011 Melbourne Poker Championships runner-up David Zhao.

Zhao was among the pack which survived Day 1C and had entered Day 2b with slightly less than his starting stack (18,675 chips). Although enjoying a little good fortune being dealt A♠ A♦ -v- the K♥ K♦ of Jan Suchanek, he had hovered around the 30BB level for most of the day. However in the final hand of the day (blinds 1,000/2,000 – ante 200) Zhao was dealt Q♣ Q♦ at the same time as the aggressive Kristian Lunardi picked up A♠ K♥. A pre-flop betting war ensued, with Lunardi making a five-bet shove and Zhao covering his bet. Lunardi may have won the betting war, but lost his hand and his seat at the table when the board ran 5♣ 4♣ 5♦ / 6♦ / 9♥ and failed to connect with Lunardi´s “Big Slick” – leaving David Zhao with a chip stack of 242,300 and in second place behind overnight leader Dave Allan.