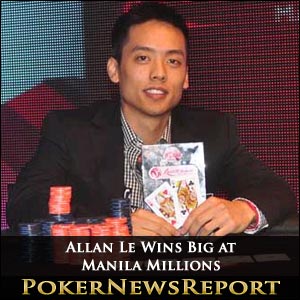 Le – whose previous biggest cash of $233,043 came with his fourth place finish in event #18, a $1,500 buy-in No-Limit Hold’em tournament, at the 42nd World Series of Poker (WSOP) last summer – beat Devan Tang in a punishing heads-up clash that saw the Chinese pro leave the Resorts World Manila’s Genting Club with $1,053,000 as runner-up in the 31-player event that broke all Asian records.

Incredibly, none of the big-name pros cashed, with former Team Full Tilt Pros Ivey, Dwan and Juanda, as well as Chan, Nam Le and APT ambassador Hachem, failing to even make the final table.

The 60-minute head-to-head – which started with Le on 1.7 million chips to Tang’s 1.4 million – provided a fitting climax to the event, with the chip lead changing hands five times before Le sent Tang to the rail.

The 4♣ A♦ 8♦ flop change nothing, while the 4♠ left just three kings available to save Tang from falling at the last hurdle. But the A♥ was not the card he wanted to see and Le had secured his first major tournament title as well as the $1.685 million for his 11 hours of work. Not bad, huh.

A second Chinese entrant, Sun Sheng, pocketed a healthy $632,000 in third place, while Malaysian Richard Yong – who is a regular at the Macau high-stakes games – left with $463,430 and American high-stakes cash pro Keith Gipson pocketed $380,000 in fifth.

Le – who has now bagged $2,144,001 after having collected $459,001 from previous live tournament cashes – entered the eight-handed final table with the third smallest chip stack, but quickly doubled-up through big stack Tang to zoom back into contention when coming from behind to out-flop his opponent.

On the button, Le limped while Canadian Winfred Yu – who exited in seventh – joined in the action from the small blind, before big blind Tang then made it 68,000.

Le called, but Yu mucked his hole cards, for the 5♠ 6♠ J♣ flop to prompt Tang into making a teasing 41,000 continuation bet. Tang took his time, but ultimately called to see the 8♦ arrive on the turn. Tang then lobbed a bunch of chips into the middle to put Le all-in for his remaining 108,000.

Short stacked Englishman Chris Parker – who is the APT founder and chief executive officer – was the first player to exit when his J♥ 9♥ lost a race against the 4♦ 4♥ of Malaysia businessman Richard Yong.

Soon after, with more than one-third of the total chips hitting the middle, Ontario’s Yu – who has enjoyed some success n Macau – was next to go in seventh place when his A♣ 3♣ came up against the A♦ Q♦ of Chinese player Sun Sheng.

Yu may well have been behind pre-flop, but the dealer then revealed 10♦ 3♥ 3♦ for the Canuck to hit trips for a lead, although Sheng had also gained a diamond flush draw to stay well in the hand. The unlucky Yu was soon hitting the rail without cashing when the 7♦ came on the turn to complete Sheng’s flush.

With the final table now six-handed and just the leading five places paid, China’s Jun Wei Liu – another Macau regular – was the most unfortunate player of the whole event as he became the cash bubble boy.

Liu, who had started the final table fourth in chips, had seen his stack dwindle, resulting in him moving all-in for his last three blinds while holding A♣ 8♣. However, Sheng scored his second successive knockout when a seven arrived on the turn to give him the winning pair from his 10♠ 7♠ hold cards, as well as the chip lead.

Liu’s elimination ensured that the remaining five players would pick at least $380,700, while Le took over as chip leader for a few minutes after gaining maximum value for his full house against Sheng when his K♣ Q♥ hit big on a board that read 4♠ 6♠ K♦ K♠ 6♥.

However, the Chinese pro once again took over at the top not long after when his A♠ 10♣ hit on the turn to beat the J♣ J♠ of Alabama’s Gipson – whose previous biggest cash came with the $65,955 he earned for 40th place in the $25,000 buy-in World Poker Tour (WPT) Five Star World Poker Classic Championship event back in late April of 2008 – and send the American out on fifth place.

Short stack Yong was hitting the rail just minutes later in fourth. He opened with a 70,000 raise, only for Le to quickly move all-in. Not to be outdone, Young then swiftly called.

Yong needed more than a little help as he tabled his pocket eights to come against the queens of Le. The 7♠ J♥ 10♥ didn’t change much, but the 4♥ turn handed Yong a heart flush draw – only for the K♣ river to extinguish his hopes.

With play now three-handed, Tang started to become much more aggressive with numerous button raises and several all-in moves. Le appeared a little put off by this sudden change in pace and saw his stack chopped down to only 370,000 – or just over seven big blinds – when he unsuccessfully attempted to defend his big blind against Tang.

Tang had moved all-in once again when Le decided to call to see a K♥ 9♠ 8♣ flop. Le checked while Tang made a 100,000 bet. Le took a while to consider his next move before calling.

The 5♥ turn prompted checks from both players, while the 2♥ river saw Le check again. However, Tang shoved in 200,000 to cause Le untold pain as he only had 670,000 remaining before this hand began, so calling would chop him down to below half that – if he lost.

With that possibility obviously in mind, Le again took more than a few minutes to make a decision. Just as it seemed certain he would fold, Le had a change of heart and made the call.

However, Tang had gained top pair on the flop with his K♣ 6♣ hole cards, so collecting more than 800,000 chips to move close to 1.1 million – just behind chip leader Sheng.

But Le was certainly not finished there and fought back to double-up in successive hands for the chip lead. The first saw Sheng move all-in while holding J♣ 6♣ for a flush draw, only for Le to hit top pair with his 10♠ 6♠. The second double-up came courtesy of Tang, when Le – with A♣ K♠ – called his opponent’s all-in move to beat out the former’s A♠ 2♣.

Sheng and Tang then became involved in a huge pot that saw the former’s stack crippled to just 10,000 when the former tried to steal the blinds. However, small blind Tang was having none of it and pushed in 665,000, to be quickly called by Sheng.

Sheng showed A♦ 9♦ to be well ahead of Tang’s K♥ 3♥. But that all changed on a K♦ 5♦ 5♠ flop as the latter took the lead, although Sheng had also secured a diamond flush draw to stay well in contention.

The Q♠ was no help to Sheng, while the 6♥ river left him with just one black chip remaining as Tang scored big.

Sheng Out in Third Place

Sheng was eliminated in third place on the very next hand when all-in with J♦ 7♥ after Tang, on the button, limped with A♦ 8♦ and big blind Le checked to see a 9♣ A♥ 4♣ flop.

Le checked again, while Tang bet his pair of aces to see the former muck his hole cards – before the 8♠ turn and 3♥ river confirmed Sheng’s exit, although his third place prize of $632,000 will have eased his pain somewhat.

The penultimate event of this season’s APT arrives in India on May 21 until the 27th for the Asian Series Goa at the Casino Royale, while the final leg takes in Macau’s StarWorld Hotel & Casino from July 25 to 31.