All Change at the Top as Urs Kohler Leads WPT Amneville

Day 2 of the World Poker Tour Amneville Main Event saw a rapid succession of chip leaders come and go – some permanently – with Swiss poker player Urs Kohler rising to the top of the leaderboard at the close of play. 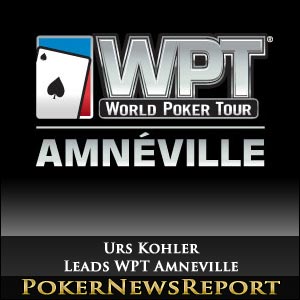 Day 2 of the World Poker Tour Amneville Main Event saw a rapid succession of chip leaders come and go – some permanently – with Swiss poker player Urs Kohler rising to the top of the leaderboard at the close of play.

Urs Kohler has never made a final table appearance in a major live poker event before – his best finish being a 32nd place cash in this tournament last year – and queuing up behind him is a stack of international talent with a history of six-figure cashes.

The 215 players who took their seats on Day 2 were headed by overnight chip leader Jean Francois Rigollet – who managed to bust his chip stack within two levels. Riad Mounir, who had been third overnight, quickly rose to head the leaderboard and was the first to breach the 200,000 chips barrier when his pocket Threes converted into Quads. However, he was soon displaced by Nesrine Kourdourli, who rivered a set of threes and was the first player to crack 300,000 chips before Marvin Rettenmaier broke the 400,000 chip level with a flush-over-flush pot against Levent Mercan.

One other player who temporarily held the lead during the day was American Joseph Cheong.  Two weeks ago he held the overall Day 1 lead in the EPT San Remo Main Event and it looked at one point if he was going to run away with this field. Having contributed to Kevin MacPhee´s departure on Day 1 when calling his 5 bet with Queen high and winning, Cheong had won a couple of coinflips to be well over 400,000 chips. Sadly he blew two major pots in succession against short-stacked opponents (Cheong A♥ 7♣ -v- J♥ J♣ and Cheong Q♠ 6♠ -v- 9♥ 10♣) to lose half his stack instead of having 600,000 chips in front of him. He worked his stack back up to 380,100 by the close of play, but was pretty disappointed not to be way ahead of the field at the end of the day.

UK poker player Luke Fields had started the day in a strong position and had risen to over 200,000 in the early levels of the day. However, he lost a massive pot against Erik Von Buxhoeveden when his 3♥ 3♦ came second to the Austrian´s A♦ 2♦ after Luke had lead the betting in each street of a board that fell A♥ 10♥ 9♥ / 8♦ / J♣. Luke´s bad luck continued when getting all-in with 2♠ 2♥ in a three way pot against 9♣ 7♠ and K♦ K♣. Way ahead after the 9♦ 2♦ 4♥ flop, the K♥ on the turn sent him to the rail in the most unfortunate circumstances, where he joined fellow Brits who bust on Thursday – Liv Boeree and Matt Frankland.

76 players survived Day 2 and will be looking ahead to Day 3 of the WPT Amneville Main Event where 5 levels are scheduled to be played unless the field is reduced to the final 18 before that point. Blinds are 1,200/2,400 with a 400 chip ante, and the average stack size is 149,605. Those that will sleep better than others include:-