All Change at the Top as Laviano Leads WPT Caribbean

Thomas Laviano took the chip lead in the final level of play to head the leaderboard in the WPT Caribbean Main Event with just thirty-two players remaining. 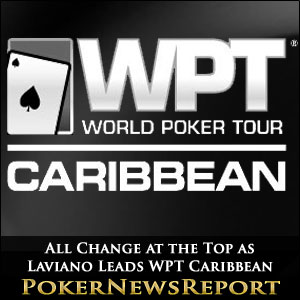 Thomas Laviano took the chip lead in the final level of play to head the leaderboard in the WPT Caribbean Main Event with just thirty-two players remaining.

Day 3 of the WPT Caribbean Main Event promises to be a tight affair, as just twenty-four of the thirty-two players that remain in the tournament will cash; and, with only one player having less than twenty big blinds when play resumes at the Casino Royale in St. Maarten, this tournament could still go in any direction.

Heading the chip counts at present is Thomas Laviano from New York, who flew into the chip lead at the end of the night when his flopped set of Eights bested Jamila von Perger´s flopped set of Deuces, and Laviano holds narrow lead over Dan Sindelar in second place, with Jean-Nicolas Fortin a dozen big blinds back in third.

Ebony Kenney Most Active During Day

Overnight chip leader Ebony Kenney was particularly active throughout the day – seeing her chip stack dented by Mike Linster in one of the first hands of the day, but recovering well courtesy of a Royal Flush to regain the chip lead by the dinner break. A further turned Flush against Tom van den Berg saw Kenney extend her lead and she was the first player over 300,000 chips when her pocket Queens held against an opponent´s Ace-King.

Kenney´s strong run continued, and she temporarily checked the climb up the leaderboard of Vet Vo when forcing him out of a 200,000 chip pot with a post-river raise, and she would have been overnight chip leader had she not doubled up Ben Warrington A♠ Q♣ > Q♥ Q♦ in one of the last hands of the night when Warrington flopped an Ace and took Kenney for more than 100,000 chips.

Four former WPT Main Event Champions are still running strong – Sean Jazayeri, Giacomo Fundaro, Bobby Oboodi and Marvin Rettenmaier. Rettenmaier would have been closer to the top of the leaderboard had he not doubled-up Alin Pandilica A♣ K♥ > A♠ Q♥ in the penultimate level of the day, but he still remains in contention with 153,000 chips.

Among the other notable names to survive Day 2 of the WPT Caribbean Main Event are Christian Stallinger, who was fortunate to bust Stephan Serfati when his 7♥ 4♦ held against Serfati´s Q♣ 10♣ after a flop of 7♣ 6♦ 3♣, and Tony Dunst – who eliminated WPT Legends of Poker winner Jordan Christos 9♣ 8♣ > K♠ 10♣ when flopping a Ten-high straight.

Looking Ahead to Day 3 of the WPT Caribbean Main Event

When play resumes at 4.00pm at the Casino Royale in St Maarten, blinds will be starting at 1,500/3,000 (ante 500) and, with the tournament scheduled to conclude on Sunday, it is likely that play will continue until just eighteen players remain. The action will be pretty slow until eight more players bust and the money bubble is burst, and those with the greatest potential for still being in the WPT Caribbean Main Event when the final table is reached on Sunday include: