Mukul Pahuja leads the six-handed final table of the WPT Bay 101 Shooting Star – the only player in the top ten chip counts at the start of Day 3 to survive. 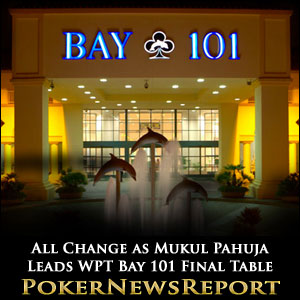 Mukul Pahuja leads the six-handed final table of the WPT Bay 101 Shooting Star – the only player in the top ten chip counts at the start of Day 3 to survive.

There was a seismic power shift on the penultimate day of the WPT Bay 101 Shooting Star, as players who had entered Day 3 with below average chip counts powered their way to the final table at the expense of those considered the most likely winner. The exception to the rule was Mukul Pahuja, who will start tonight´s final table as chip leader after a post-dinner surge which saw him triple the size of his chip stack. Pahuja goes into tonight´s climax with a twelve big blind lead over Dylan Wilkinson, with Shaun Suller a further thirty-three blinds behind.

Sung Fails to Shine as Contenders Step Up

Day 3 of the WPT Bay 101 Shooting Star started with Steve Sung holding a massive chip advantage over the remaining 35 players, and looking a strong favourite to add a second seven-figure score to the one he achieved in last summer´s World Series of Poker Event #52. However, through the first few levels of Day 3, Sung was practically anonymous; and, as short-stacked players doubled-up or bust, new contenders emerged as challengers for the $1,256,550 first prize – most noticeably Mukul Pahuja, who breached the million chip barrier by eliminating David Paredes A♥ A♠ > A♣ J♥. Nam Le – who won this event in 2006 – did his chances of a repeat victory no harm by busting out Thomas Lutz and crippling Tai Nguyen in a three-handed pot in which his pocket Kings held against Nguyen´s pocket Tens and Lutz´s Ace-rag, while Bryce Yockey temporarily took over at the top of the chip counts when eliminating Noah Villancourt in twenty-ninth place K♦ K♥ > 9♠ 9♦, and Shaun Suller doubled up against Larry Odegard Q♣ Q♠ > 9♦ 9♣ before busting him in twenty-seventh place K♦ 8♦ > J♣ 8♣.

Pahuja and Yockey Head the Field at Half-Way

For a while it looked as though Pahuja and Yockey would turn the WPT Bay 101 Shooting Star into a two-horse race – Mukul Pahuja busting out John Andress A♠ 5♠ > A♦ 2♦ and Ben Hamnett A♠ K♥ > 3♣ 3♥, and taking a massive pot from David Randall to be the first player above 2.5 million chips; before Bryce Yockey eliminated Lucas Ke Q♣ 3♣ > K♦ 10♠ and Josh Prager 10♥ 10♠ > 7♥ 7♦ to have 2.8 million chips at the beginning of Level 23 (blinds 10,000/20,000 – ante 3,000). Steve Sung eventually woke up as the field was reduced to twenty players – eliminating Owen Crowe in twentieth place and Nicky Nican in fifteenth place – but he was still behind Pahuja and Yockey in the chip counts at this stage, and also Dylan Wilkerson; who had chipped up well with the elimination of Justin Young Q♣ Q♦ > A♣ K♣. The field then started to compact at the top of the leaderboard as Steve Sung knocked out Candace Collins A♣ A♠ > 6♣ 6♠, Garrett Greer doubled-up against Dylan Wilkerson K♣ Q♠ > A♦ 10♦ and Brian Park eliminated Jonathan Little K♠ K♥ > Q♦ Q♥ to reduce the field to twelve over two six-handed tables.

Yockey and Sung Fall as Pahuja Moves Ahead

Bryce Yockey´s participation in the WPT Bay 101 Shooting Star ended in a confrontation with Mukul Pahuja – Yockey moving all-in with 8♣ 6♣ on a flop of Q♣ J♥ 10♣ and Pahuja making the call with K♣ 9♠. Yockey failed to make his flush draw, and Pahuja bust him out in eleventh place with his flopped King-high straight. Dylan Wilkerson moved into second place on the leaderboard with the elimination of Brian Park in tenth place, and temporarily took the chip lead in a pot against Steve Sung in which Wilkerson´s A♠ K♣ paired on the flop to cripple Sung (10♣ 10♠) – Sung being eventually bust out in eighth place at the hands of Garrett Greer A♠ 3♥ > K♣ 10♠. As the seven remaining players congregated around one table, Mukul Pahuja regained the chip lead when forcing Wilkerson out of a million chip pot, and then winning a second million chip pot against Wilkerson with pocket Queens. The final six-handed table was set when Shaun Suller eliminated Herbie Montalbano J♣ J♥ > 8♥ 9♥ and, when the final table gets underway tonight, the respective chip stacks will look like this: