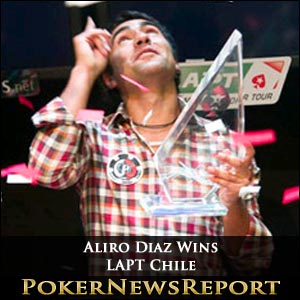 Aliro Diaz has become the first home player to take down the Latin American Poker Tour (LAPT) Chile main event title after playing “the best tournament” of his life to pocket $76,580 following a six-way agreement in Viña del Mar.

Aliro Diaz – who is also just the second Chilean to win an LAPT tournament – saw off the challenge from 650 other starters in the $1,000+$100 buy-in main event that fell just short of the tour’s record field of 681 competitors at LAPT Colombia last October, eventually beating fellow countryman Leonardo Olivares in their heads-up match that left the runner-up with $66,000.

However, Olivares was not the second-best paid from the Enjoy Casino & Resort event, with fourth-placed Chilean Felipe Velasquez leaving with $74,000 – less than $3,000 behind the winner – after the deal meant the top prize of $129,470 was reduced somewhat dramatically.

Champion Battles Back for Victory

The eight-handed final table took five hours to complete on Day 4, when Diaz came from behind to snatch the title from the grasp of Olivares.

Diaz showed J♣ 7♣ for two pair while Olivares tabled A♠ Q♦. The 5♠ turn was dead, but the J♠ river sealed the deal for Diaz as he now had a full house for victory, the top prize and the LAPT trophy.

Colombian Sergio Escobar had started the final table as chip leader, just ahead of another home player in Felipe Velasquez – who swiftly eliminated short stack Nicholas Batt, also of Colombia, in eighth place for $13,040 to take over at the top during level 25 with the blinds at 20,000/40,000 blinds and an ante of 5,000.

Venegas doubled-up to 1,600,000, while Batt was chopped down to 700,000 chips. As such, Batt moved all-in pre-flop on the next hand with jacks and received one caller in Velasquez, who tabled the Big Slick. The latter won the coinflip to take over as chip leader on 2,800,000, while Batt was gone.

Brazilian Halysson Sala was next to hit the rail in seventh place for $17,470 just a few minutes later when losing out to Diaz.

Diaz moved on to just above 1.5 million with that elimination – and the remaining six players then agreed to a deal which meant huge chip leader Velasquez was guaranteed $60,000 and the other players $40,000 to leave a little cash back for the final placings.

Escobar was the first player to exit following the deal, when his 9♥ 9♦ was beaten out by the A♦ Q♥ of Velasquez as an ace arrived on the flop. That meant the Colombian left in sixth for $47,000.

Argentinian Venegas followed Escobar to the rail in fifth for $50,000 soon after when his K♥ 3♦ failed to overcome the A♦ 10♠ of Olivares.

Short stack Venegas, on the button, moved all-in for 710,000, with the action folding to big blind Olivares, who took some time before calling.

The 7♥ K♦ J♥ flop gave Venegas top pair, but the A♥ on the turn put Olivares ahead once more. Venegas was hoping for another heart on the river, but the 10♣ arrived to seal his fate.

The final four was made up of three home players and one Brazilian, but it was a Chilean who would next leave the table in fourth place for $74,000 when Velasquez suffered two massive hits to his chip stack – one from each of his fellow countrymen.

Firstly, Velasquez raised to 700,000 in a pre-flop fight with Diaz, who then moved all-in to force his opponent into folding. Velasquez then gave up 600,000 chips to Olivares when he attempted a bluff with just ace-high, only to see his opponent table a set that cut the Chilean struggler down to about 1.5 million in chips.

Not long after, Velasquez found himself in the small blind and shoved to receive a call from big blind Diaz.

Velasquez showed A♠ 5♠, but was behind the 9♦ 9♣ of Diaz. The flop provided Diaz with a nine, while Velasquez found a straight draw, only for the trips to hold to eliminate the former chip leader.

Brazilian João Lopes just missed out on heads-up play when he raised to 300,000, only for Diaz to shove all-in. Lopes called to table a pair of threes, while Diaz showed sevens – and the latter’s starting hand stayed ahead to eliminate the Brazilian in third.

The next stop during season five of the LAPT arrives in Uruguay on May 23 for five days of action. The Punta del Este main event will be priced at $2,300+$200 and runs from the 24th to the 27th at the Mantra Resort, Spa & Casino.