Alija Filipovic has won the PokerStars Eureka Poker Tour Croatia stop for €42,700 after seeing off 177 other players at Zagreb’s Golden Sun Casino. 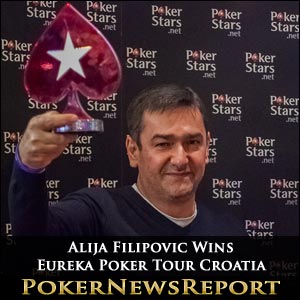 Home player Alija Filipovic has won the PokerStars Eureka Poker Tour Croatia stop for €42,700 after seeing off 177 other players over four days in the €1000+€100 buy-in main event at Zagreb’s Golden Sun Casino in the Hotel Antunovic.

On the button, Filipovic raised, only for Mecs to shove all-in with K♥ J♦ in an effort to double up. However, Filipovic called to show A♠ K♦ for a dominant lead ahead of the flop.

The flop came K♣ 8♣ 5♦ to give both top pair, although Filipovic’s kicker kept him ahead. The 5♣ turn handed Mecs some extra split pot possibilities, but the Q♣ river ensured that the Croatian was champion – much to the delight of the gathered railbirds.

Dragan Galic Fails to Live Up to Favourite Tag

Galic had been the favourite to take the title when the final table began, undoubtedly because of his having secured approximately $1.2 million from live tournaments.

However, the initial chip leader was unable to take the Eureka trophy, even though he added to his huge lead as the short stacks suffered. Slovenia’s Kis was the first to exit in eighth place when his pocket eights lost out to Galic’s full house.

Van de Goor was next to go in seventh, with the Dutch player’s all-in bluff called by Filipovic, who showed A♠ K♠ for the nut flush.

Premuzic hit the rail in sixth not long after tripling-up to 130,000 chips when his aces held on a board of J♥ 4♣ 5♥ Q♦ 6♠ against Galic and Bibov. His final hand arrived when he shoved over the top of an opening bet from Mecs.

Fifth place went to another home player in Brkicic when he moved all-in for his last 160,000 following an initial raise of 33,000 from Filipovic.

Filipovic quickly called to show A♠ 7♠, while Brkicic flipped over A♥ 9♠ for the lead. However, the 7♥ 5♣ 4♥ flop then handed Filipovic the lead, and the 8♠ turn and 7♦ river changed nothing for Brkicic to crash out.

Short stack Bulgarian Bibov, in the small blind, exited in fourth place when he shoved all-in against big blind Galic, who quickly called to show 7♠ 7♥ for the lead as the former held Q♦ 10♣.

The A♥ J♠ 3♠ flop supplied Bibov with a little hope, only for the J♣ turn and 4♠ river to end that dream as Galic’s sevens held.

Filipovic Sends Galic To The Rail

On the button, Galic moved all-in with K♥ 10♣, only to be called by chip leader Filipovic, who showed A♥ 10♥ for a huge lead pre-flop.