Alicia Sale is the Queen of Queenstown In APPT Day 1C

44 players converged in Queenstown for Day 1C of the APPT Main Event, “Snowfest”, and although the numbers do not look great, the quality on show was amazing. 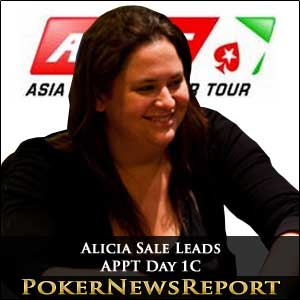 44 players converged on the Skycity Casino in Queenstown, New Zealand, for Day 1C of the Asia Pacific Poker Tour (APPT) Main Event – the “Snowfest” – and although the numbers do not look great, the quality on show was amazing.

Among today´s competitors were 2011 ANZPT Adelaide Champion Octavian Voegele, defending ANZPT Queenstown champion Julian Cohen and 2011 APPT Melbourne Main Event Champion, Leo Boxell. Cohen and Boxell both busted out in a tough day, and although Octavian Voegele will be happy with his day´s work, he must be wondering if there will be any catching New Zealander Alicia Sale.

Alicia Sails Along in Front

The story of Alicia Sales´s day was one of good turned bad and then bad turning back to good. Before play started, Alicia had been awarded a PokerStars snow board for winning one of the APPT side events (Dale “Daleroxxu” Philip also got one for winning the Pot Limit Omaha side event), but within the first two hours of play she had been crippled by Leo Boxell´s rivered flush.  Alicia recovered at the expense of Joshua Jurcic when her J♥ 8♥ found the 7♦ 9♠ 6♣ on the flop and a handy 10♦ on the turn to enable her straight to double up and, with her tournament life resurrected, Alicia started climbing up the leaderboard.

All –in against Octavian Voegele´s J♦ J♣, Alicia turned over K♦ 2♦ on a flop of 6♣ 2♠ 2♣. Although the 9♣ on the turn gave Voegele outs to a flush, the 8♦ on the river gave the chips to Alicia (Brad Bower was also to take a sizeable pot from Andrew Scott with K♥ 2♦ later in the day). She then scored the double elimination of Leo Boxell and Joshua Jurcic when her A♦ 6♠ found 9♦ Q♦ 2♦ on the flop and the 4♦ on the turn to give her the nut flush, and completed her day by eliminating Joel Dodds when her A♠ 3♥ met with 3♠ A♣ 5♣ on the flop.

Alicia leads the tournament overall with a larger chip stack than the leaders could acquire on Day 1A (Cole Swannack 86,050) or Day 1B (Marcel Schreiner 72,600) and will head the field of 71 who remain in the Main Event when play resumes just after midnight (UK time) tonight.