Mike Sexton and Vince Van Patten – Where are you? 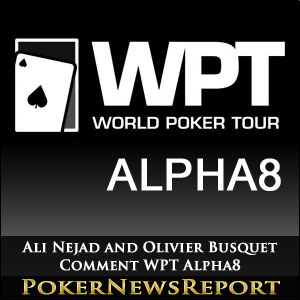 Mike Sexton and Vince Van Patten – Where are you?

For the past 11 years, Mike Sexton and Vince Van Patten have provided colored commentary for every WPT main event. The dynamic duo, along with analyst Tony “The Raw Deal” Dunst, has lifted the series to new heights, culminating in increasingly high viewership and a call for more in-depth coverage. In lieu of this, and the increased interest in High Roller events, the WPT is launching a new series – Alpha8.

The series, which will kick off on August 26th at the Seminole Hard Rock Hotel & Casino, will feature tournaments with buy-ins of at least $100,000 each, and will be broadcast on Fox Sports 1 starting in March, 2014. In addition to the higher stakes, the new broadcast will feature a new, eight-player final table, a new set and to the surprise of some, new commentators – Olivier Busquet and Ali Nejad.

Busquet is a successful high-stakes cash and tournament player who during ESPN’s coverage of the WSOP Main Event provided in-depth analysis and commentary of pivotal hands. His demeanor, knowledge and broadcast ability was praised. Busquet has a WPT title to his credit, winning the Borgata Open in 2009 and he is considered one of the most successful online heads-up player of all time.

Unlike Busquet, Nejad is not much of a poker player. He is however, an experienced commentator who has covered NBC’s National Heads-Up Poker Challenge and Poker After Dark. In total, Nejad has contributed his straight-forward brand of poker commentary for over 10 years. Najad has also acted as a correspondent for ESPN’s WSOP and has worked as a commentator for CBS and Velocity’s Epic Poker League.

Lynn Gilmartin will serve as the show’s anchor. Not just another pretty face, Lynn has earned her stripes with PokerNews, and has years of tournament poker reporting experience.

High stakes poker tournaments are reserved for the brightest minds – and the biggest egos – in the poker community. And while it is expected that some rich businessmen will enter the fray, Alpha8 will primary feature some of the highest level poker ever broadcast on television. Stay tuned!