Alexey Rybin Wins WPT Cyprus – but Not According to Plan

Alexey Rybin won the WPT Merit Cyprus Classic, but only after he had staged a remarkable recovery from seeing his chip stack decimated at the final table. 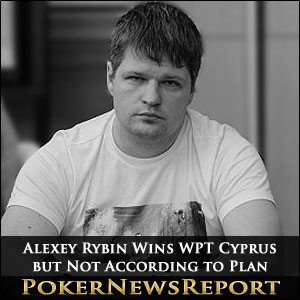 Alexey Rybin won the WPT Merit Cyprus Classic, but only after he had staged a remarkable recovery from seeing his chip stack decimated at the final table.

Alexey Rybin broke into a smile during the presentation ceremony at the end of the WPT Merit Cyprus Classic Main Event; but it was a smile of relief rather than a smile of happiness, as he almost lost the tournament he had led since the close of Day 1A.

Many observers anticipated a continuation of the previous four days of action – in which Rybin had juggernauted his way through the field with the huge chip stack he had accumulated from the start of the event – but, as the six remaining players took their seats at the final table, few could have forecast the swings of fortune Rybin would have to endure being lifting the WPT Cyprus trophy.

Pierre Sayegh´s participation in the climax of the WPT Cyprus lasted a little over twenty minutes. With blinds of 12,000/24,000 (ante 4,000), the Lebanese player was expected to make an early move, and shoved from the Big Blind with A♣ 9♣ in the ninth hand of the day. Sayegh was called by his compatriot Albert Daher (7♦ 7♥) and with neither an Ace nor a Nine on the board, Sayegh was sent to the rail in sixth.

The next two shortest stacks enjoyed a better start to proceedings – Kayhan Tugrul hit two pair with J♥ 9♣ to chip up against Daher (K♥ Q♣), while Daher was also responsible for doubling up Sergey Rybachenko (6♥ 6♦ > A♦ 9♠) and, by the end of the first level of the final day, Daher had slumped from being a challenger to the chip leader to being the player most at risk of elimination.

The loss of the chip lead could hardly have come in less dramatic fashion. Andrei Nikonov had stolen a few blinds and antes at the beginning of Level 25 (blinds 15,000/30,000 – ante 5,000) and had chipped up to more than 2 million chips. Rybin had been trying to bully Albert Daher, but folded on the river to a Daher shove – reducing Rybin to 1.6 million chips and demoting him into second place on the WPT Cyprus leaderboard for the first time since last Friday.

Nikonov extended his lead when his Q♦ J♦ bested Kayhan Tugrul´s A♥ 5♠, and took his stack above 3 million chips when a six-bet pre-flop shove forced a significant fold from Sergey Rybachenko – Rybachenko being the next player to leave the table after being crippled by Albert Daher (A♦ K♠ > K♦ K♣ – Daher hit the A♣ on the river to stay in the tournament), and then losing the last of his chips to Daher in a K♣ K♦ > 10♣ 10♦ confrontation.

Rocky Rybin Gets Shorter before Staging a Recovery

With the table now four-handed, Alexey Rybin was reduced to 750,000 chips and became the short-stack after folding on the river (again) to a Daher shove; but he was able to mount a recovery after two uncontested shoves of his own and a double-up against Kayhan Tugrul (A♥ K♦ > A♠ 10♥) which reduced the Turkish player´s chip stack to 380,000 chips.

Daher Dominates Until Rybin Bites Back

Albert Daher twice more forced post-flop folds out of Rybin, and took a chunk out of Andrei Nikonov´s stack with a set of Sixes before business returned to normal, and Rybin got back to bossing the table. A valuable double up with A♦ K♠ > A♥ 5♣ against Daher put Alexey Rybin back into contention, before big post-flop bets against Nikonov and Daher moved him into second in the chip counts.

A Rybin bluff reduced Nikonov to less than a million chips, and Nikonov´s participation in the WPT Merit Cyprus Classic Main Event ended when he called Rybin´s pre-flop shove with A♣ J♥ and Rybin spun over A♦ Q♠. With no Jacks appearing among the community cards, Nikonov had gone from being chip leader to being bust from the tournament in third in the space of twenty minutes.

With momentum on his side, Alexey Rybin wrapped up the heads-up against Albert Daher in four hands. In the first he crippled Daher when his A♥ K♦ found two pairs on the flop. Daher managed double-ups in the second and third hands of the climax to the WPT Cyprus Main Event (K♠ Q♥ > Q♦ 5♠ and 2♦ 2♠ > A♥ 6♥), but was still looking at a 6:1 chip disadvantage.

Rybin wrapped up the tournament in the next hand – shoving pre-flop with A♠ 5♥ and being called by Daher, who was looking at K♠ 9♣. Rybin cracked his first smile of the week when the A♥ was dealt on the flop, and his hand held to give Rybin the WPT Cyprus title and winner´s cheque of $258,000.