Russian poker player Alexey Rybin dominated Day 2 of the WPT Merit Cyprus Classic to hold a substantial lead as the tournament heads towards the money. 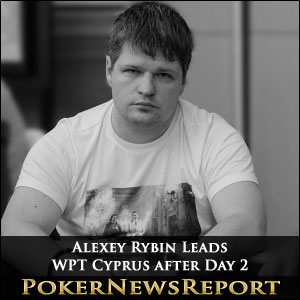 Russian poker player Alexey Rybin dominated Day 2 of the WPT Merit Cyprus Classic to hold a substantial lead as the tournament heads towards the money.

Only 31 of the 103 players who took their seats for Day 2 of the $4,400 buy-in WPT Merit Cyprus Classic will return this afternoon to the Merit Crystal Cove Resort and Casino to compete in the penultimate day of the event – after a day on which many of the tournament´s star attractions fell out of contention.

Without doubt the biggest star to fall was Sam Trickett – fresh from his Old Trafford success – who shoved during the first level of the day with A♥ 2♦, but could not find the Ace he needed to overcome the pocket Queens of Mikhail Shevchuk – Trickett was soon joined poolside by Party Poker Big Game winner Roger Hairabedian and Party Poker ambassador Kara Scott after both were also bust during the first level.

The player who had entered Day 2 at the head of the chip counts after a stunning Day 1B – Bernard Samaha – looked like he was going to storm away with the event after busting Mihail Morozovs 5♥ 4♥ > A♣ 3♥ in the second level of the day; but he remained fairly anonymous thereafter and finished the day with 17,000 chips fewer than he had started with.

At the other end of the spectrum, Day 1A chip leader and Russian cash game specialist Alexey Rybin improved from a starting stack of 216,500 chips – due to  a meteoric post-dinner level in which he eliminated Vyacheslav Stoyanov A♠ Q♠ > A♣ 9♦ and then bossed his table – to close the day with 858,000 chips.

Although a long way behind Rybin, several players caught the eye during the final levels of the day. Among them Asaf Avci who got to within 200,000 chips of Rybin when busting Koray Aldemir A♦ 7♦ > 10♦ 8♦ three hands from the end of proceedings, before doubling up Kayhan Tugrul in the last hand of the night to finish on 519,500 chips.

There was also a late burst onto the scene from 2011 EPOF/WPT Diamond Championship winner Natalya Nikitina – who enjoyed a sick run which included the eliminations of Marko Neumann (Queens > Jacks), Elias Abou Saleh (A♣ 6♣ > A♦ A♥) and Samy Zakhary (A♥ K♦ > K♠ Q♣). Nikitina bagged and tagged 468,000 chips at the close of play.

Looking ahead to Day 3 of the WPT Merit Cyprus Classic

With only 27 of the remaining 31 players due to cash in the WPT Merit Cyprus Classic, the start of Day 3 could be an arduous affair. Three players have less than 100,000 chips and, with blinds of 2,000/4,000 (ante 500), will not have a lot of time before they have to make a move to prevent themselves from being blinded out.