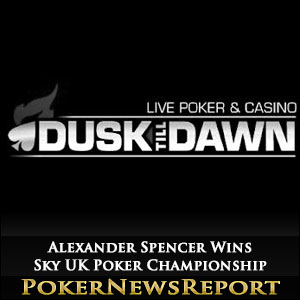 There was a cracking conclusion to the £500,000 guaranteed Sky UK Poker Championship yesterday, as Alexander Spencer belied his youth to win the Main Event for £125,000 and a package to play in the WSOP Main Event – when he is old enough!

Spencer entered the final table with the chip lead after busting out a series of players on Day 2, including the most successful player ever to come out of Holland – Marcel Luske – and Irish legend Chris Dowling. However, Spencer faced a tough task ahead, with the likes of Chaz Chattha and Paul Delaney also in the final table line-up.

With blinds of 30,000/60,000 when the nine remaining players took their seats, it was not long until the first player departed. In the third hand of the day, John Haigh moved all-in from UTG+1 with A♣ 6♣. Steven Sargent, sitting one place to his left, also moved all-in with pocket Kings and Deborah O´Connell made the call with pocket Queens. Sargent´s pocket Kings held on a Nine-high board, and John Haigh was sent to the rail in ninth place, with Steven Sargent virtually tripling up while Deborah O´Connor was crippled and reduced to the short-stack.

However, as the eight remaining players converged on the TV table (highlights from the Sky UK Poker Championship will be broadcast in March) it was Allan Graham who was the next player to leave – moving all-in with Ace-King on a Nine-high flop, getting a call from Steven Sargent (A♣ 9♣ for top pair) and failing to find the King he needed on the Turn or River to stay alive in the tournament.

Deborah O´Connell´s attempt to grow her short stack came to nothing when she moved all-in with pocket Nines and got called by Danny Blair (Ace-Ten). Blair hit an Ace on the flop and a second on the Turn to eliminate O´Connell in seventh place – but her reward of £16,000 was a pretty decent return considering that she had qualified for the Sky UK Poker Championship Main Event through a £1.00 online satellite.

Meanwhile, the dual KOs of John Haigh and Allan Graham moved Steven Sargent up towards the top of the leaderboard, but it was not a position he was to hang onto for long due doubling up Paul Delaney (Aces > Kings) and then paying Delaney off with a rivered pair of Aces against his own pocket pair of Nines. Chaz Chattha was also getting short-stacked due to being bossed around by James Rimmer and Paul Delaney, and he was the next player to bust from the tournament.

Chaz Chattha had been card dead for most of the opening exchanges, but eventually found a spot to move all-in with Ace-Seven. James Rimmer made the call from the Big Blind with pocket Sevens and the board fell unkindly for Chattha – eliminating him in sixth place. Chattha was soon after joined on the rail by Steven Sargent, whose pocket Fives had failed to improve past Paul Delaney´s pocket Jacks and, as the game went four-handed (blinds now 60,000/120,000) the respective chip counts looked like this:

Rimmer Out, Delaney Out and Spencer Leads into Heads-Up

The increasing blinds and the relative closeness of the stacks kept the game very tight, and when action took place, it was usually decisive. Alexander Spencer and James Rimmer exchanged places on the leaderboard when Spencer doubled-up with Aces > Ace-Queen and, as the blinds rose to 100K/200K (ante 30K), Danny Blair laid down a challenge for top spot when his Ace-Eight flopped Trips against Paul Delaney´s pocket Sixes.

James Rimmer was eventually eliminated in fourth place when his Ace-Deuce failed to connect with the board against Alexander Spencer´s pocket Sixes, and Paul Delaney bust in third place when his Ace-Eight paired on the flop of Queen-Four-Eight, but Spencer´s King-Queen had also connected. The two quick eliminations gave Alexander Spencer a 13.8 million -v- 4.8 million chip advantage against Danny Blair going into the heads-up.

Blair Moves Ahead, but Spencer Aggression Wins the Day

The early encounters of the heads-up saw Alexander Spencer increase his chip lead, but a double-up Ace-Queen > King-Queen and Turned Trip Threes moved Danny Blair into the chip lead. A double-back by Alexander Spencer (Ace-King > pocket Tens) enabled Spencer to regain the chip lead, and he reduced Blair to 2 million chips when rivering two pairs with King-Five.

Alexander Spencer kept the pressure on – forcing Danny Blair to fold or shove in every hand – and eventually the strategy paid dividends. Danny Blair moved all-in from the Button for his last six blinds. Alexander Spencer did not hesitate to make the call and the cards were on their backs

The flop of 10♠ K♣ 6♣ put Alexander Spencer ahead in the hand, and the Queen that Danny Blair needed to stay alive in the tournament failed to materialise on the Turn (9♥) or River (6♦).

Alexander Spencer´s rail mobbed the lad from Sheffield with congratulations on becoming the Sky UK Poker Champion of 2014, while Danny Blair at least had £75,000 second prize money for consolation.