The climax of the PartyPoker WPT Merit Classic saw some incredible hands shape the outcome of the event in favour of Russian poker player Alexander Lakhov. 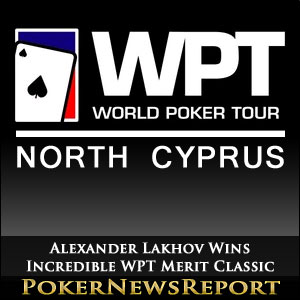 The climax of the PartyPoker WPT Merit Classic saw some incredible hands shape the outcome of the event in favour of Russian poker player Alexander Lakhov.

Alexander Lakhov must love playing poker at the Merit Crystal Cove Hotel and Casino in Cyprus. Yesterday he completed a hat-trick of notable live poker successes with victory in the PartyPoker WPT Merit Classic, after winning the Million Dollar Merit Fall Open in 2012 and Merit World Cup of Poker in 2013 at the same venue.

The $325,400 Lakhov collected for winning the WPT Merit Classic elevated him into the top 20 on the Russian all-time live poker money list – despite having never won a live poker tournament in his home country. The win was the biggest of his career, but possibly also the luckiest.

However, before we go into a re-cap of yesterday´s action, it should be pointed out that Lakhov was the victim of a brutal bad beat during Monday´s action, when Sam Trickett avoided elimination during hand-for-hand play when rivering a Full House to crack Lakhov´s flopped Broadway straight. The manner of Lakhov´s victory would imply that luck evens itself out over a period of time and that the most skilful players win the most!

More than four hundred players had entered the $4,400 buy-in PartyPoker WPT Merit Classic Main Event, creating a prize pool just short of $1.5 million. After four days of action, just six players remained – headed by Nicolas Chouity, who himself had enjoyed some considerable good fortune during the penultimate day of the event.

The tournament resumed in Level 26 with blinds of 20,000/40,000 (ante 5,000) and, in the first hand of the day Igor Devkin doubled up against Nicolas Chouity A♠ 6♠ > Q♦ 9♣ when rivering an Ace-high Flush. Chouity lost two further big pots in quick succession when forced out of the hands by Toby Lewis, and was reduced to less than 2.5 million chips when Toby Lewis rivered a set of Jacks against Chouity´s Ace-high.

Nicolas Chouity regained the chip lead when busting Igor Devkin in sixth place K♠ K♦ > Q♣ Q♦,and he extended it when Alexander Lakhov (Q♠ 9♠) missed both his Spade Flush and gutshot straight draw against Chouity´s (J♠ 10♥) paired Ten. With the elimination of Ori Miller in fifth place (A♥ A♣ > K♦ J♠), Chouity had build his chip stack to more than 5.7 million chips and appeared to be running away with the event – but then things started going a little bit crazy.

Players who are familiar with Toby Lewis´ style of play commented that he had three-bet more often at this final table than he had throughout his entire career, and for a while his betting actions paid dividends. Lewis took down two uncontested pots to collect the blinds and antes (now 40,000/80,000 – 10,000) and forced Nicolas Chouity out of two significant pots before moving all-in one too many times and running his A♣ 10♥ into Dmitry Gromov´s A♦ J♥. With no help from the board, Toby Lewis was eliminated in fourth place.

The remaining three players – Gromov, Chouity and Lakhov – were now fairly evenly matched in chips as the game entered Level 30 (blinds 50,000/100,000 – ante 15,000), but a sensational hand saw the demise of Nicolas Chouity in third place.

Chouity was a mile ahead in the hand with his pair of Kings, and Gromov only had one out available to him – the 2♦ – as the 2♠ would have completed Chouity´s King-high Flush. Incredibly, the 2♦ spiked on the River to give Dmitry Gromov a 3:1 chip advantage going into the heads-up against Alexander Lakhov, while Nicolas Chouity walked stunned from the table.

Let the Luck be with Lakhov!

Dmitry Gromov´s sensational hand against Nicolas Chouity must have use up all his good fortune, because as the heads-up got underway, all the luck was with Alexander Lakhov. The Russian got on level terms almost immediately when he cracked Gromov´s pocket Aces with rivered trip Jacks, and two hands later hit runner-runner trip Nines to move into a clear chip advantage.

Gromov tried to battle back, but all the big pots were going in the direction of Alexander Lakhov – who was even taking down million chip pots with King-high! Gromov eventually moved the last of his chips into the middle with A♦ 2♦ and got a call from Lakhov (J♦ J♠). After what had preceded the last hand of the final, the board of K♦ 10♥ 5♣ / 5♠ / 10♣ was a bit of an anti-climax; and Lakhov´s Jacks held for him to win the PartyPoker WPT Merit Classic and complete his hat-trick of victories at the Merit Crystal Cove Hotel and Casino.