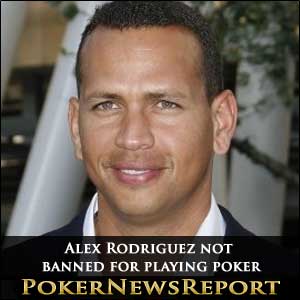 Being a third baseman ensures that New York Yankees star Alex Rodriguez will know all about risks and gambles and this is something that will likely bring him an advantage when playing poker, but if it’s any good for his baseball career remains to be seen.

The amount of spare time and high levels of disposable income means that many baseball players like to indulge in a game of poker or two but Rodriguez has been in the spotlight after reports of him playing in illegal poker games with celebrities like Tobey Maguire and Matt Damon surfaced.

Even though many people will be thinking what is the harm of a baseball star, who will be earning  a considerable wage, from taking part in a few high stakes poker games, there is another element to be aware of. The possibility that the high-end poker games could see baseball players coming into contact with people who participate in baseball betting has many within the sport on guard with regards to involving themselves in the community. It is not as if anyone is looking to state that all poker players are serious gamblers or vice versa but there can be an overlap between the two groups.

This can be a dangerous area for any baseball player to be involved in and Rodriguez should be very aware of the dangers of being involved in this type of scenario. In fact, back in 2005, Rodriguez was handed a warning by the Yankees and by Bud Selig, the commissioner of baseball that fraternising with this community could see a lifetime ban from baseball being handed out. The name of Pete Rose continually gets mentioned with respect to life-time bans in baseball and it is obviously something that the sport and the player would wish to avoid at all costs.

Even though if he has been playing poker, he will most likely not be banned from playing baseball. A stern warning is likely to be the toughest punishment handed out and this will hopefully serve as a reminder about his contractual duties and obligations to his team.

Rodriguez has denied any involvement in the game and has refuted the allegations that were made against him in Star Magazine and RadarOnline and has also stated that he will be happy to assist the MLB with any investigation they carry out.