A new record of 422 players in the Main Event was established at the LAPT Punta del Este in Uruguay, where Komaromi walked away with the first prize of $244720. 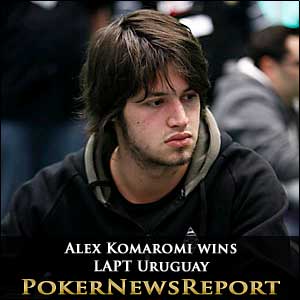 The Latin America Poker Tour continues to break records at every stop in its fourth season.

Having seen the biggest fields to date when the tour went to Chile in March, a new record of 422 players in the Main Event was established at the LAPT Punta del Este in Uruguay this past weekend. And it was a young Uruguayan player – Alex Komaromi – who walked away with the record breaking first prize of $244,720.

Even though Komaromi had made impressive strides during Day 3 of the event, a Brazilian – any Brazilian – was expected to take the event – with four of them lining up on the final table including PokerStars pro, Rafael Lopes Monteiro. Monteiro, however, was the first of the four to go when his A♣ Q♣ was out-kicked by Venezuelan Engleberth Varela´s A♠ K♣, and he was quickly followed by compatriots Fernando Araujo (7th), Nelson Neto (6th) and Felipe Sangalli Pasini (5th).

And Then There Were Three

After the quick departure of the Brazilians, it was Peruvian PokerStars player Carlos Watanabe´s turn to hit the rail when his pocket fives were spiked by Engelbeth Varela´s pair of Queens, and within two hours of play we were down to the final three players – chip leader Alex Komaromi, Argentinian Claudio Piedrabuena and the final PokerStars qualifier, Varela.

Varela Out in Third

With almost a quarter of a million dollars at stake, play over the next hour was exceptionally tentative – no player wanting to make the mistake that would see them eliminated in third. Eventually the tension got to Engelbeth Varela, who got all-in against Komaromi with an ace in his hand and an ace on the board. Sadly, for Varela, Komaromi also held an ace – and a better kicker – and the last qualifier was busted out with $88,970 for his fantastic efforts.

The Heads-Up Goes One Way and Then the Other

Claudio Piedrabuena wasted no time in revealing his strategy for the Heads-Up play. Starting at a 810,000 v 7.63 million chip deficit, Piedrabuena was all-in every hand.  The first showdown went in his favour when his A♥ A♣ held up against Komaromi´s A♦ 6♦, and he briefly took the chip lead when his 10♠ 10♦ took the pot against Komaromi´s A♥ J♠, but the lead was reversed once again when Komaromi´s A♦ K♠ turned over Piedrabuena´s A♠ 10♥, and it was all over within 30 minutes when Komaromi caught two pairs to bust Piedrabuena´s ambitious club flush.

As the venue erupted into a sea of blue and white, Komoaromi was swamped by friends and family members who had sat through a tense four days of action cheering every pot that he took down and praying (literally) that the 21 year old would be the first Uruguayan to win the LAPT Main Event – not just on home soil, but the first anywhere. As it turned out, their prayers were answered and about the only words that a stunned Komoaromi could say during the post-match interview were that “We’re probably going to go party”.

The Top 12 prizes at the LAPT Punta del Este