Brazilian Alex Gomes leads after Day 1 of the $1,500 buy-in Pot-Limit Omaha Hi-Lo Split-8 or Better event #47 of the World Series of Poker (WSOP) in Las Vegas. 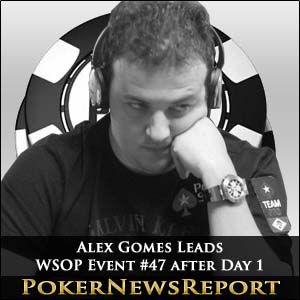 Brazilian Alex Gomes leads after Day 1 of the $1,500 buy-in Pot-Limit Omaha Hi-Lo Split-8 or Better event #47 of the World Series of Poker (WSOP) in Las Vegas.

The opening day saw 987 players sign up for the event in the Rio All-Suite Hotel & Casino’s Brasilia Room to create a prize pool of $1,320,300 – no doubt pleasing organisers as that number is an increase of 41 from last summer’s 946-strong line-up. Yes, PLO is a game on the rise, there is no doubt.

Ten levels were played out, reducing the field to only 149 Day 2 starters as they first aim to break through the money bubble – with 117th place being paid the minimum $2,509 – then make the final table, before hopefully claiming the gold bracelet and $267,345 first place prize.

Brazilian Makes Top Spot His Own

Gomes, of Curitiba, steadily built his chip stack on Day 1, hitting big when he needed. For example, late in the day, Portland’s Joseph Haddad shoved all-in pre-flop to get a call from Gomes.

The 9♣ river made Gomes’ hand even stronger with two pair to send Haddad to the rail, while also ensuring that the Brazilian would lock up the Day 1 chip lead on 143,300 – which is way ahead of second placed Canadian Roch Cousineau (95,500) and England’s James ‘Flushy’ Dempsey (third on 77,000).

But last year’s champion, California’s David Singontiko, couldn’t make it into Day 2 – crashing out with only 30 minutes of Day 1 remaining. The pot was at 9,800 on a board that read 7♦ 6♥ 3♦ K♠ when Italian Dario Alioto checked to allow Singontiko to make a pot-sized bet. However, Alioto then moved all-in for 15,100 with Singontiko making the call.

Singontiko revealed A♠ A♥ J♦ J♣, but found himself drawing dead after Alioto’s A♣ 3♥ 4♣ 5♦ had made a straight. The insignificant 4♥ came on the river, while Singontiko was left holding only 2,500 chips, which became zero just a few hands later.

Interestingly, many players from the $50,000 buy-in Poker Players Championship event #45 over in the Amazon Room of the Rio were also involved in this tournament.

The likes of Jason Mercier, Scott Clements, Dan Kelly, Shaun Deeb and Chad Brown had busted out of event #45 so decided to try their luck in the Brasilia Room – although none were successful as they all hit the rail early.