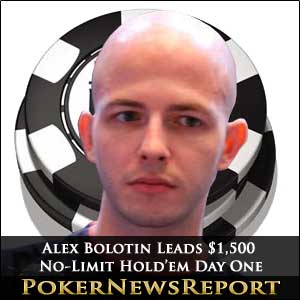 Brooklyn-based Alex Bolotin takes the chip lead into day two of the $1,500 No-Limit Hold’em event at the World Series of Poker (WSOP) in Las Vegas after last night’s 10 levels.

Additionally, London’s Laurence Houghton (91,200) will look to add to Britain’s three gold bracelets at this year’s WSOP as the starting field of 2,713 was cut back to just 370 survivors in the race to pick up the $650,223 top prize in the Amazon Room of the Rio All-Suite Hotel & Casino.

New Jersey’s Dwan – always one who enjoys multitasking – played in three events yesterday as took part in the opening levels of this event, before moving on to day two of the $2,500 Omaha/Seven-Card Stud Hi-Low-8 or Better event.

He then returned to this event during a break in the mixed tournament, before again coming back after busting out of the hi-low. However, he also crashed out of the $1,500 No-Limit Hold’em poker tournament to focus on the $2,500 2-7 Triple Draw Lowball (Limit) event. Phew!