Alex Bolotin won the $1,500 buy-in No Limit Shoot-Out Event #6 to add to his WSOP Ante Up for Africa victory in 2009 and three previous WSOP final tables. 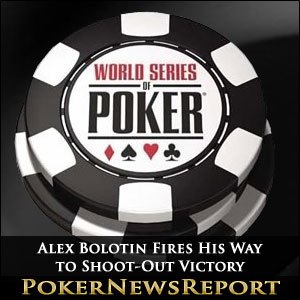 Alex Bolotin won the $1,500 buy-in No Limit Shoot-Out Event #6 to add to his WSOP Ante Up for Africa victory in 2009 and three previous WSOP final tables.

The Shoot-Out Event #6 of the 2014 World Series of Poker has a unique format which sees two rounds of Sit n Go games culminating in a final table of dual winners. 948 players entered the event, from which 120 progressed onto the second round of games, and this left twelve finalists on the concluding day of the event.

Due to the uneven entry (i.e. some of the first round tables had more players than others) there was a slightly uneven distribution of chips between the twelve players – but only three big blinds separated chip leader Steven Loube (361,000 chips) and short-stack Steven Geralis (346,000 chips) when the twelve finalists took their seats on two 6-handed tables.

With little to choose between the twelve Shoot-Out finalists, there was little dramatic early action. Jared Jaffee had the misfortune to run his pocket Nines into Steven Loube´s pocket Aces to be eliminated in twelfth place, and Steven Geralis also ran into Aces to be bust in eleventh place by Jon Lane.

Meanwhile, PCA Main Event winner Dimitar Danchev had moved up to the top of the leaderboard courtesy of a flopped set of Nines against Maxx Coleman, while Alex Bolotin recovered from an early mishap to score a timely double-up against Shawn Busse A♦ K♦ > Q♣ 10♥.

The remaining players congregated around one table when play went ten-handed, and the “official” final table was set when Colin York moved all-in with A♣ K♦, but failed to find the Ace he needed to improve past Josh Arieh´s K♣ K♠.

Arieh Busts Four then Busts Himself

There was an astonishing start to the final table when dual WSOP bracelet winner Josh Ariel eliminated Maxx Coleman in the first hand J♦ J♣ > A♦ Q♦, and then followed up ten hands later by busting both Shawn Busse (A♥ J♣) in eighth place and David Trager (7♥ 7♣) in seventh place when his A♣ Q♠ connected with the Q♣ on the Turn.

Arieh´s lead was short-lived however; as he chipped up Dimitar Danchev K♥ Q♣ > A♦ K♣ (Danchev rivering two pairs) and then doubled-up Alex Bolotin A♦ A♣ > 10♦ {10♠ç after eliminating Douglas Foster in sixth place K♣ Q♠ > K♦ J♠.

Alex Bolotin then joined Dimitar Danchev at the top of the leaderboard by sending Steven Loube to the rail in fifth place Q♥ Q♣ > K♠ J♣; and he became a clear chip leader when completing Josh Arieh´s demise and rivering a flush to bust Arieh from the tournament in fourth place 5♥ 2♥ > A♦ 7♦.

Danchev Cracks Lane´s Aces, but Bolotin Leads into Heads Up

Despite being the shortest stack player, Jon Lane mixed it up with the two chip leaders, as was remarkably unlucky to be eliminated in third place by Danchev – when moving all-in with A♥ A♠, but falling to Danchev´s flopped set of Deuces.

Despite cracking Lane´s Aces, Dimitar Danchev took 1,840,000 chips into the heads-up against Alex Bolotin (2,426,000 chips). and for an hour the tow finalists played small ball poker – Bolotin only making any inroads into Danchev´s stack when rivering a Five-high straight to best Danchev´s paired A♣ J♣.

The small-ball poker continued for some time, with Alex Bolotin taking advantage of his dominating chip stack to force Dimitar Danchev off of big pots with increasing frequency. The deficit between the two players began to grow, and Danchev – needing to do something to remain competitive in the game – decided to move all-in on the board of 3♠ K♣ 9♦ / 6♣ / 5♦.

Alex Bolotin tanked for two minutes before making the call, after which Dimitar Danchev flipped over Q♠ J♥ for a Queen-high bluff. Bolotin turned over K♦ 8♠ for top pair, and the title of Shoot-Out champion in WSOP 2014 Event #6.