Germany’s Aleksandar Abutovic has collected the €500 buy-in main event of the Paradise Poker Tour (PPT)’s sixth leg at the Gran Casino in Barcelona. 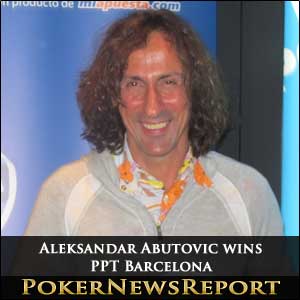 Germany’s Aleksandar Abutovic has collected the €500 buy-in main event of the Paradise Poker Tour (PPT)’s sixth leg at the Gran Casino in Barcelona.

Aleksandar Abutovic left with €27,000 from a prize pool of €155,500 for his triumph, which beats his previous biggest cash, although he wasn’t the top earner in the Catalan capital city, with runner-up Jose Maria Felices bagging an additional €1,000 after the pair had agreed to a chop when they entered heads-up play.

However, Abutovic – who had started the day sixth in chips – outlasted 310 other starters at the final stop of the tour’s second season, with his most important success coming against Spaniard Felices when going head-to-head.

Sabatas was the first player eliminated from the final table, when his Q-10 came up against Jaskolski’s pocket aces. The board ran nine-high and the Spaniard was out.

Haglund revealed A♦ K♦, while the board ran J♦ 8♠ A♥ 7♥ K♠ to give the Swede two-pair to take down the pot and gain the chip lead.

However, Haglund was out in seventh less than 20 minutes later when – after losing the majority of his chips to Felices – the Swede, who had entered the final day as chip leader, came up against Gajdecki’s A♠ A♥ in a pot totaling 1.3 million.

In second position, Gajdecki raised to 50,000, before Haglund, on the button, three-bet to 132,000. But the Pole then moved all-in, with the Swede making what appeared to be a reluctant call with 9♥ 9♦.

The board showed K♥ 2♥ K♦ 8♠ 2♦ to see Gajdecki’s aces hold up and Haglund exit as the Pole became the new chip leader on approximately 1.5 million.

We were soon down to five players remaining as Dimitrov left in sixth. The Bulgarian was the big blind, but only had about 200,000 chips left. When the action folded to small blind Abutovic, his raise put the Bulgarian all-in.

Dimitrov did call to show Q♦ 10♥ to dominate Abutovic’s 9♥ 3♦. However, the flop showed 7♣ 5♣ 6♣ to provide the German with a double gutshot draw. Of course, his straight arrived on the 8♦ turn, before the unimportant A♦ came on the river.

Student Gajdecki – who had won his package to enter the event and was forced to hitchhike his way for 36 hours to Barcelona from Poland – was eliminated in fifth.

Two hands in quick succession did for him, though, when left with only 75,000 of his stack after fellow Pole Jaskolski had pushed with A-8 to hit an ace and Gajdecki had called with K-Q.

The next hand saw small blind Gajdecki move all-in with K-9 and big blind Felices call with Q-5. A five arrived on the flop, sending the Pole out in fifth.

It took quite a while before we were down to three-handed play, but Motoro did eventually cash with his fourth place finish.

Half-an-hour later, the heads-up battle was on after Felices and Jaskolski committed their stacks pre-flop. Jaskolski held pocket jacks against Felices’ K-10, and the Pole was certainly thrilled to see a flop of A-J-2 to give him trips aces.

The turn came a safe three before a queen arrived on the river to give Felices a Broadway straight that left the Pole crippled and out following the next hand.

So, after doing their deal, Felices and Abutovic got in on in their heads-up clash that lasted under an hour with the blinds set at 30,000/60,000.

The final hand was something of a comedy affair as – with their deal done – Felices appeared ready to gamble on any two cards.

On the button, the Spaniard raised to 1,000,000, only for Abutovic to move all-in. Felices had already put almost half his stack in the pot, so called, although he was left in bad shape as his 3♠ 4♦ was met with Abutovic’s J♣ J♦.

The board showed 8♠ 7♥ K♠ 5♣ 2♠ and Abutovic had won with his pocket pair. Felices shook hands with his German opponent, then stepped aside to let Abutovic take the plaudits.