Alban Juen Back in Front at ISPT Wembley 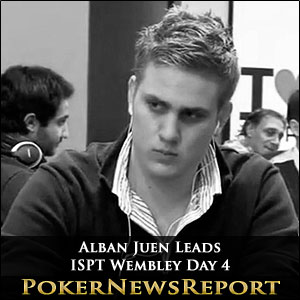 The qualifying structure of the inaugural International Stadiums Poker Tour allowed Alban Juen to come to the first of the live Day 2´s with almost four times the chip stack of those who paid €3,000 to directly enter the later stages of the event. Juen used that advantage to take the chip lead into Day 3 and was still knocking on the door behind Ole Schemion at the start of play yesterday. However, following a whirlwind finish to Day 4´s action, Juen is back in front of the 20 players that remain in the tournament.

Will the Last Player to Leave Wembley Please Turn Off the Lights!

After a short Day 3, Tournament Director Simon Trumper announced at the start of play that seven levels would be completed yesterday, irrespective of the number of players that remained. His words must have fallen on deaf ears, as the rush to bust out of the ISPT and board a plane to Vegas was even more frantic than on the previous day.

Leading the charge to the exit was ISPT ambassador Sam Trickett, who lost almost half his overnight chip stack during the first level of the day to overnight chip leader Ole Schemion (A♣ K♠ > 10♠ 10♥). Trickett then doubled up Benoit Albiges (A♦ J♦ > A♣ K♥ – the money did not go in until Albiges´ Jack paired on the Turn) and threw the last of his chips into the pre-flop betting with J♥ 6♥ – only to miss the board completely against Andreas Constantinou´s A♠ J♦.

Desperate not to miss the plane to Las Vegas, Trickett left in such a rush that he forgot to collect his €3,000 cheque for finishing in 77th position. When ISPT tournament staff managed to contact him to advise him of his mistake, rather than turn his taxi around and return to Wembley, Trickett told the tournament representative that they should keep the money and distribute it between the staff.

Notable eliminations during Day 4 included overnight chip leader Ole Schemion, despite busting Sam Trickett from the tournament and forcing Benoit Albiges out of a 200,000 chip pot early in the day. Schemion – who is too young to join the festivities in Vegas – suffered a couple of hits to his chip stack during Level 21 (blinds 10,000/20,000 – ante 3,000) before recklessly shoving his last 550,000 chips into the middle with no better than 5♣ 5♠. Jakub Michalak (A♦ J♦) hit the J♠ on the Turn to bust Schemion from the tournament.

Also out of the inaugural International Stadiums Poker Tour on Day were Matt Frankland (59th), Nik Persaud (37th) and Day 2B re-entry Toby Lewis, who admitted that it had been difficult playing against €3.00 qualifiers before crashing out in 47th (AQ < KK v Florian Hoeller) for a net gain of €450 over four days. Recent GukPT Stockton winner Neil Raine and UKIPT London final tablist Chris Dowling also had to accept small net gains as they tumbled out of the tournament in 85th place and 46th place respectively.

Dusk till Dawn regulars Nick Hicks and Pete Linton produced the best performances among the remaining UK players. Hicks shot up the chip counts to temporarily lead the tournament after taking a 3 million chip pot against Amy Trodd (A♠ A♦ > K♦ K♣) and busting Andre Andrade 10♦ 10♠ > A♥ K♦ for another million chips. Pete Linton matched Hicks´ progress by getting three streets of value with A♠ A♣ against Daniel Platten and then busting Ivan Tikhov (K♥ Q♣ > A♥ J♦) when catching the Q♦ on the flop. It would have been most fitting for the two Englishmen to lead a DTD-sponsored event at Wembley into the penultimate day, but Alban Juen had other ideas.

Juen maintained his position among the leading chip stacks throughout the day by cracking Jerome Brion´s A♣ A♥ with a flopped two pair and busting David Drai in the first hand after the dinner break K♦ K♣ > Q♦ 10♦. However, his rise to the top of the ISPT leaderboard came in two dramatic hands at the close of play. In the first, Juen (Q♣ J♣) hit a flush on the river to eliminate Florian Schultz (J♠ J♦) and he then took a further million chips from Dave Ulliot (Q♠ J♣ – hit a straight on the turn) when his Q♣ 2♣ found a runner-runner flush to leave Ulliot spitting expletives (for a change).

Looking Ahead to Day 5

When play resumes at noon in the Bobby Moore Suite at Wembley Stadium, the remaining 20 players will be entering Level 25 (blinds 25,000/50,000 – ante 5,000). Play will continue until the final table of nine is set – so it could be another short day. The next player out will receive €7,950 for their efforts, while those who make it into the final nine will be assured of a minimum cash of €26,520. Those with the best chance of getting their hands on the €1 million first prize include:-