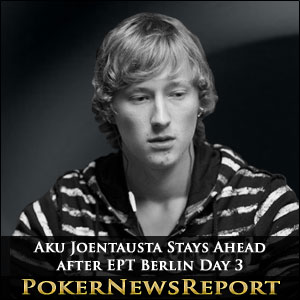 With 55 players remaining in the EPT Berlin Main Event, Finnish poker player Aku Joentausta maintained his impressive performance to end “Bubble Day” at the top of the leaderboard; but whereas at the start of yesterday´s play he had a commanding advantage of 73 big blinds over the rest of the field, this morning that advantage is down to less than 3 big blinds.

Ohlsson in Second, But Alekberovas the Dangerman

Sweden´s Emil Ohlsson is the player closest in chips to Aku Joentausta, being the only other player to close the day off with more than a million chips. However, whereas Ohlsson was chipping up in relatively small pots, huge swings in fortune were being experienced by Lithuanian player Anaras Alekberovas, who had started the day second in chips and at one point was the clear chip leader.

Alekberovas´ chip stack had been plummeting from a starting 529,800 chips to 325,000 chips prior to the bubble bursting but, once in the money, the Lithuanian´s fortunes reversed as he sent Manig Loeser (8♦ 8♥ > K♥ J♦) and Marcelo Manfredini (A♦ Q♣ > A♣ 5♥) to the rail, before forcing Oleksii Khoroshenin out of a massive pot to climb up to 1.2 million chips. His downward spiral was initiated when Matias Juhani Kesanen (Q♥ Q♣) caught a set of Queens to double up against Alekberovas´ turned two pairs (9♦ 7♦) and the “Dangerman” bagged up only 805,000 chips at the close of play.

UK and American Hopes in Danger

In yesterday´s PokerNewsReport, we mentioned that neither a British nor an American player had won an EPT Main Event this season, and after yesterday´s events that statistic looks as if it will remain – with neither nationality appearing among the top ten chip counts (below). Only two UK poker players remain in the EPT Berlin Main Event – Thomas Hall (449,000 chips) and Liv Boeree (279,000 chips) – while the American challenge is lead by Calvin Anderson (744,000 chips), who has just three compatriots for company.

Boeree (EPT San Remo Season 6) is one of four players remaining in the event who has the chance to become the first ever dual winner of an EPT Main Event. The other three are Thang Duc Nguyen (EPT Baden Season 3 – 779,000 chips), Kevin Stani (EPT Tallinn Season 7 – 681,000 chips) and PokerStars Team Pro Sandra Naujoks (EPT Dortmund Season 5 – 202,000 chips).  Boeree and Naujoks may have to get their skates on when play starts today at the Grand Hyatt Hotel in Berlin, as the Main Event will be entering Level 20 with blinds of 5,000/10,000 and an ante of 1,000 chips.

Those who can afford to take things a little easier include: