Finland´s Aku Joentausta sits comfortably on top of the EPT Berlin Main Event leaderboard after an action-packed Day 2 at the Grand Hyatt Hotel. 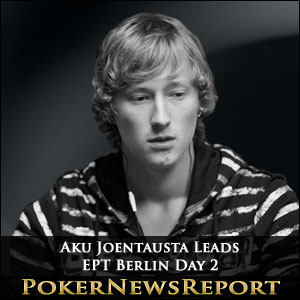 Finland´s Aku Joentausta sits comfortably on top of the EPT Berlin Main Event leaderboard after an action-packed Day 2 at the Grand Hyatt Hotel.

The Finn, who has a history of performing well in EPT side events, leads the Main Event field courtesy of two knockout hands during the middle stages of the day. In the first Joentausta bust UKIPT Series winner Jake Cody A♣ Q♦ > A♥ 8♠ when flopping 3♥ A♠ Q♥, and then he eliminated compatriot Janne Nevalainen K♣ 10♥ > J♠ 10♠ when the flop of J♣ J♥ Q♠ gave Nevalainen trip Jacks but the 9♥ on the turn made a King-high straight for Joentausta.

Joentausta´s lead is a considerable 73 Big Blinds over the chasing pack – lead by Anaras Alekberovas and Day 1A chip leader Ronny Voth – with Michael Mizrachi´s conqueror Khiem Nguyen (Full House over Ace Flush) sitting in fourth and last year´s EPT Berlin Main Event winner Davidi Kitai still in contention after bagging up 282,100 chips – most of them courtesy of a Q♦ Q♣ > 9♦ 8♥ hand which saw the end of Walter Blattler´s participation in the tournament.

Short Day for Some, Shorter for Others

The break between the last two of the scheduled six levels of play was cancelled in order that players could watch the start of the Bayern Munich -v- Barcelona Champions League semi-final, but for 307 of the 475 players who returned for Day 2, the match could not start soon enough.

Home Side yet to Score in EPT Season 9

An interesting statistic put together by the PokerStars reporting team in that no German poker player has won an EPT Main Event since Martin Finger handed his rivals a beating at Prague in December 2011, and despite the presence of Ronnie Voth, Khiem Nguyen and Dominik Nitsche in the Top 10 chip counts (below), German players are woefully under-represented among those players with an above average chip stack (156,343 chips).

It could also be the first season of the European Poker Tour in which a UK poker player fails to win an EPT Main Event – or, incredibly there are no winners from the USA. With only the EPT Berlin Main Event and Season 9 finale still to come in Monte Carlo, best hopes of a British victory on German soil lie with Tamer Kamel (119,400 chips), Christopher Day (114,200 chips) and Barny Boatman (102,700 chips), while the Americans have two players with above-average chip stacks in Colin Moffatt (252,600 chips) and Calvin Anderson (178,700 chips).

Looking Ahead to Day 3 of the EPT Berlin

Those with their sights set higher than a min-cash include:-