Sergio Aido won the €2,200 buy-in UKIPT Galway High Roller at the weekend after making a hero call during the heads-up climax of the event against Kyle Maguire. 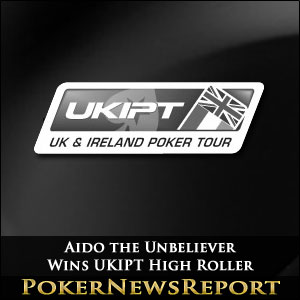 Sergio Aido won the €2,200 buy-in UKIPT Galway High Roller at the weekend after making a hero call during the heads-up climax of the event against Kyle Maguire

The affable Spaniard added the UKIPT Galway High Roller title to the WPT Barcelona and UKIPT London titles he has collected within the last year after an astonishing conclusion to the event. Having started the final day third in chips behind Christopher Day and Kyle Maguire, Aido stormed into the chip lead within two levels after taking a massive pot from Day and eliminating Jan Przysucha in fifth (Q♠ Q♥ > K♥ 10♣).

With blinds of 2,500/5,000, the game could have gone on for a while, but an incredible hand as the two sat down to battle out the climax of the UKIPT Galway High Roller gave Aido a huge chip advantage – and a considerable psychological one as well!

Aido check-called Maguire´s 47,000 bet following the 8♥ on the turn, but after the 2♣ on the river, Maguire announced he was all-in. Aido thought about his decision for several moments before calling off his last 215,000 chips.

All Over for Maguire in Next Hand

Speaking in an interview after the game had finished, Aido was asked about the hero call that had set up his victory and simply said “I just didn´t believe him”. Aido then jumped into the UKIPT Main Event, looking to add a fourth major title to his live poker portfolio with the space of twelve months.

Footnote: Due to so many potential entrants still being involved in the UKIPT Galway Main Event on Saturday, the €10,300 buy-in UKIPT Super High Rollers event was cancelled.