Spaniard Sergio Aido won the climax of the PokerStars-sponsored UK and Ireland Poker Tour Main Event and £144,555 when back-to-back flips went in his favour. 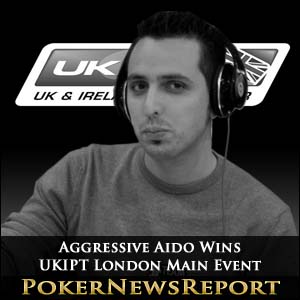 Spaniard Sergio Aido won the climax of the PokerStars-sponsored UK and Ireland Poker Tour Main Event and £144,555 when back-to-back flips went in his favour.

Having taken down the WPT National in Barcelona last October, Spanish poker pro Sergio Aido had experience of how to handle a well-stacked final table, and he put that knowledge to good use with some aggressive – not always fruitful – play at the UKIPT London Main Event final table.

In an interview before the players took their seats, Aido admitted that the final table would be “interesting because all players have chips to play with” and he was spot on with his prediction as the balance of power went in one direction and then another throughout the conclusion to the event.

Aido the Aggressor – Simcoe the Destroyer

Sergio Aido gave notice of what was to come in the first hand – three-betting the pre-flop raise of Philippe Souki and then taking down an uncontested half million chip pot with a post-flop continuation bet. Several hands later Aido was on top of the chip counts with a double up against Chris Dowling (10♦ 10♥ > A♦ K♦) which crippled the Irishman.

Dowling´s misery was complete when he got the last of his chips in with Q♦ 7♦, only to be called by Patrick Simcoe (who had just doubled up against Thomas Ward) who’s K♥ 9♠ held. Simcoe took his chip stack above 5 million chips in the very next hand when busting Cesar Garcia K♠ K♦ > J♥ J♣ in seventh, and the gap between Simcoe and the chasing pack was extended further when Thomas Ward came from behind to take a slice of Aido´s stack in a A♠ J♣ > K♠ K♣ race for his tournament life.

Belgians Bust – Down to Four

As the blinds rose to 40,000/80,000 – ante 5,000 – Simcoe and Aido stepped up the aggressiveness to steal the majority of pots between them. Philippe Souki managed to take one monster pot (1.4 million) when forcing Wim Neys to muck his hand faced with an all-in river bet, but passed most of his winnings across the table when caught bluffing by Thomas Ward.

Belgian poker player Guy Goosens had struggle to keep his chip stack intact during the incessant attack on his blinds and eventually shoved the last of his chips into the middle with pocket Deuces. He was called by Sergio Aido (5♠ 3♠) and was eliminated from the tournament when the board ran 7♠ Q♠ 5♥ / 3♦ / 7♠. Goosens was quickly followed to the rail by compatriot Wim Neys – who moved all-in for 1.5 million chips with A♠ 9♦ and was called by Aido holding 7♦ 7♥. The pocket Sevens held and the tournament was reduced to four players.

With blinds rising to 50,000/100,000 – ante 10,000 – Philippe Souki had to act quickly. Unfortunately he chose the wrong moment to shove his remaining chips into the middle with 10♦ 9♦ and was called by Thomas Ward, whose pocket Sevens held – eliminating Souki in fourth place and enabling Ward to grab the chip lead from Patrick Simcoe. Ward´s chip advantage did not last long as Sergio Aido rivered a flush in the very next hand to take a commanding lead in the tournament, only for Ward to regain the chip lead when doubling up in a A♦ Q♣ > Q♦ Q♠ punt.

One hand later and Sergio Aido was no longer the short-stack after his A♠ 7♣ made two pairs on the board to damage Patrick Simcoe´s stack – Simcoe then getting all his chips into the middle with A♦ 3♦ on a flop of K♥ 3♥ 5♦ to be snap-called by Aido (K♣ 10♦) whose paired King held and gave him a 10 million to 6.2 million chip advantage going into the heads-up.

Sergio Aido´s chip advantage was quickly reversed in the opening hands of the heads-up as Thomas Ward hit two pairs (K♠ 2♠) in the first hand of the tournament climax and then built a 2:1 chip advantage when rivering an Ace and calling Aido´s one million chip bluff bet. However, the game was quickly to turn on two identical hands.

Ward (K♣ Q♣) had five bet Aido (A♦ J♥) to the point where a call would have put Sergio Aido all-in. Aido made the call and watched the 10♠ high board spring him back into the chip lead. In the next hand it was Aido (A♠ J♠) who was the aggressor – five-betting Ward (10♦ 10♣) all-in. The A♥ on the flop put Aido in the lead and his victory was confirmed when the A♣ was dealt on the river.

Sergio Aido will now compete in today´s UKIPT Champions of Champions tournament – hoping to win packages to each of next season´s UKIPT main events. Thomas Ward will have to settle for an enhanced second-placed payday of £116,845 after the two players made a deal during the heads-up – the rest of the final table payouts looking like this:-