The Alderney Gambling Control Commission (AGCC) would like Nevada to amend its current online poker laws to include agreements for international compacts. 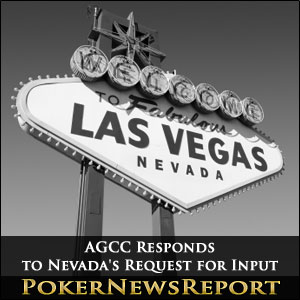 The Alderney Gambling Control Commission (AGCC) would like Nevada to amend its current online poker laws to include agreements for international compacts.

The AGCC’s urging for restructured legislation was in response to the Nevada Gaming Commission’s (NGC) request for input regarding how interstate compacts should be regulated. Last month, the NGC posted a Notice of Request for Comments on its website soliciting advice from interested parties who wished to have a say in the matter.

In February, Nevada Governor Brian Sandoval signed legislation allowing the Silver State to increase player pools by entering into agreements with other states that have also regulated online poker. The original draft of the bill included provisions allowing for international compacts. However, the bill signed into law included no such language. The AGCC would like Nevada gaming officials to consider partnerships with other jurisdictions, eGR reported.

The NGC also sought input on whether revenue sharing among states should be factored by the location of the placed wager or the location of the server or host. The AGCC advised Nevada to determine the allocation of tax revenue by where the bet is placed. In other words, if a compact exists between Nevada and Delaware and a player situated in Nevada makes a bet, Nevada gaming officials would determine the percentage of the rake to be shared with its partnered state of Delaware.

Automated Revenue Collection System (ARCS) based in Arizona also answered the NGC’s request for comments and does not share the same view of the AGCC. Greg Mullaly of the ARCS stated that players should be taxed on a format that’s based on each player’s physical location. Mullaly pointed out that the Tribal Gaming Act does not require tribes to provide states with tax revenue. Therefore, taxing each player would guarantee that state governments obtain a portion of the generated revenue.

Some other comments fielded by the NGC included concerns that player funds be segregated and that safeguards be put in place to prevent fraud and cheating by both players and site operators. The NGC is accepting comments and suggestions through April 12. Parties wishing to reply to those comments have until April 19 to do so. Following the deadline for comment submissions, the commission plans to schedule a regulatory workshop to address the concerns and suggestions raised by interested parties.