The Alderney Gambling Control Commission (AGCC) has revealed details of a public hearing that will be held early next month into the application made by Full Tilt Poker company Orinic Limited for a new licence. 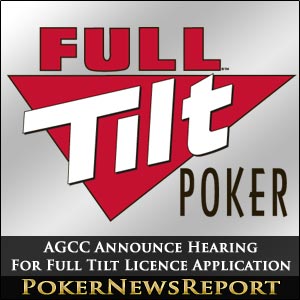 The Alderney Gambling Control Commission (AGCC) has revealed details of a public hearing that will be held early next month into the application made by Full Tilt Poker company Orinic Limited for a new licence.

The Full Tilt subsidiary applied for the licence recently and now the AGCC have responded by setting up a hearing that will allow for oral submissions at the Braye Beach Hotel in Alderney on Thursday, May 3, at 14:00 local time.

While this might not seem too significant in itself, this licence application could well herald Full Tilt’s return to the online poker scene, particularly following so soon after the recent reports that the Dublin-based Pocket Kings Limited – the marketing and technology division of the beleaguered poker room – had placed adverts for jobs on Irish employment website jobs.ie.

As everyone must know by now, the US Department of Justice (DoJ) shut down numerous poker sites – including Absolute Poker, PokerStars and Full Tilt – when money laundering allegations, bank fraud and illegal gambling came to light on Black Friday – or April 15 – last year.

Orinic Limited Licence Was Only Suspended

Orinic was, of course, caught up in the troubles surrounding Full Tilt and had their licence suspended – but not revoked as they were not trading at that point – by the AGCC at the same time as the commission withdrew Full Tilt’s licences last year.

Could this be good news for Full Tilt’s frustrated customers? Let’s hope so as it is believed that as much as $440 million is still owed to them. Certainly, it does appear to be a step in the right direction, particularly when Groupe Bernard Tapie (GBT) seem to be so close to completing the deal with the DoJ.

The full public hearing announcement from the AGCC stated:

This hearing will take place at 2.00pm on Thursday 3rd May, 2012 at the Braye Beach Hotel, Alderney.

Stay up to date with everything related to Full Tilt, Black Friday and potential US legislation with Poker News Report.