The Alderney Gambling Control Commission (AGCC) has announced the date for the re-scheduled Full Tilt Poker license hearing. Originally adjourned from July 26th to allow Full Tilt Poker time to pursue a “commercial negotiations”, the new date for the hearing is September 19th – four days later than originally planned. As with the previous hearing, the venue for the event is London´s Riverbank Park Plaza Hotel on the Albert Embankment, with the hearing open to the public and scheduled to commence at 9.00am. 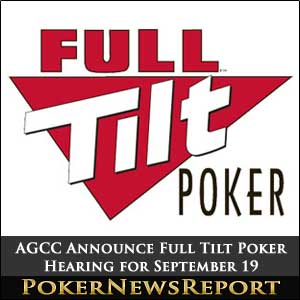 In a change of venue from the previous hearing, the AGCC have announced that it will now be questioning Full Tilt Poker´s legal representatives at the Riverbank Park Plaza Hotel on the Albert Embankment to enable more interested parties to attend. The hearing open to the public and scheduled to commence at 9.00am (those wishing to attend are requested to contact the AGCC on +44 (0)1481 825500 or via info@agcc.gg).

The Reason for the Hearing

The AGCC had also insisted after Black Friday that a condition of allowing Full Tilt Poker to remain in operation was that they ring-fenced and protected players´ funds – something Full Tilt Poker failed to do and the reason for the suspension of the worldwide AGCC operating license in June.

The day following the suspension of the worldwide operating licence, a class-action lawsuit was filed by Todd Terry and three other ex-Full Tilt Players against the company under RICO legislation (Racketeer Influenced and Corrupt Organizations). This has since been followed by a further lawsuit from Canadian players Zayn Jetha and Donald Whelan claiming that they are owed money from the poker site.

The Chances for Re-Licensing are Thin

In August, Full Tilt Poker paid £250,000 in overdue licensing fees to the AGCC – a move which was interpreted by many as a sign that the commission would allow Full Tilt Poker to re-open outside of the States. But with the recent news that Full Tilt´s potential investor has withdrawn from talks, and that the lawyers representing Full Tilt Poker and their associated companies in the class action lawsuits want to withdraw from defending them, it all looks very bleak for the company and the chances of them having their licence returned.

At this hearing at least.