The American Gaming Association (AGA) supports the Reid-Kyl bill and has urged Congress to act swiftly in approving the measure during the lame duck session. 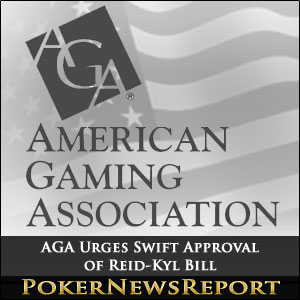 The American Gaming Association (AGA) supports the Reid-Kyl bill and has urged Congress to act swiftly in approving the measure during the lame duck session.

Worried that a state-by-state patchwork of regulations<>/q> would create havoc in properly regulating gambling over the Internet, the AGA issued a press release Monday prompting lawmakers to act now in establishing a framework of federal legislation. The release stated that the AGA supports the general provisions outlined in The Internet Gambling Prohibition, Poker Consumer Protection and Strengthening UIGEA Act of 2012, which is the official title of the Reid-Kyl bill.

Without any federal guidelines in place, the result will almost certainly be inadequate oversight that creates a world of unnecessary risk and problems for law enforcement and U.S. consumers.

The AGA’s prompting of Congress to act prior to 2013 echoes the sentiments of the Fraternal Order of Police (FOP), who urged lawmakers last week not to dilly-dally in approving the framework of the Reid-Kyl proposal. The FOP cited law enforcement difficulties in combatting crimes associated with unregulated Internet gambling.

Congress must establish federal minimum standards that address consumer protection, prevent underage gambling, promote responsible gaming and provide help for those with gambling problems, Fahrenkopf said. He added that the enactment of a federal regime will allow law enforcement officials to have the necessary tools at their disposal to prosecute those who are engaging in illegal online gambling activities.

While the FOP and AGA stand behind the Reid-Kyl bill, other organizations are rallying against it. The National Governors Association and a coalition of state lotteries have strongly voiced objections to the measure. Lawmakers in certain states such as Delaware and New Jersey, who are hopeful that their residents can someday enjoy legalized online casino gambling, have also criticized the Reid-Kyl bill. The current draft of the Reid-Kyl proposal strengthens regulations against Internet casino games and other forms of online gambling, while making provisions for online poker.

Throughout the remainder of the current session of Congress, the AGA is reaching out to lawmakers to increase support for legislation and ensure that members of Congress have all the facts about the threat posed by inaction at the federal level, the press release stated.

The Reid-Kyl bill is currently lacking Republican support. It hasn’t been introduced in Congress, though recent reports indicate that Senate Majority Leader Harry Reid may still try to win approval of the measure from his colleagues.