The AGA has firmly supported online poker legalization in a recent statement released for consideration by the subcommittee that held a hearing last week. 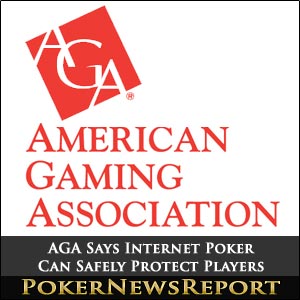 The American Gaming Association (AGA) has firmly supported legalization of online poker in a recent statement released for consideration by the subcommittee that held a hearing last week debating the issue of whether online poker legislation can safely protect consumers.

The hearing before the House Subcommittee for Commerce, Manufacturing and Trade was chaired by Rep. Mary Bono Mack (R-CA) and heard testimony from a witness panel that included Poker Players Alliance (PPA) Chairman Alfonse D’Amato, Keith Whyte, Executive Director of the National Council on Problem Gambling, and Chairman Ernest L. Stevens of the National Indian Gaming Association. The hearing was entitled “Internet Gaming: Is there a Safe Bet?”.

In the statement issued by the AGA, President and Chief Executive Officer Frank J. Fahrenkopf, Jr. answers the topic question by stating “yes, that safe bet can be found in the licensing and regulation of online poker.” The unsafe bet would be not changing the current law that fails to protect “consumers, minors and those with gambling problems vulnerable to unregulated offshore companies,” Fahrenkopf said.

Although the subcommittee’s intention was to debate internet gaming as a whole, the vast majority of the hearing centered on internet poker, and the AGA’s statement followed suit by addressing online poker almost exclusively. Fahrenkopf explained this by comparing poker to other forms of gambling.

The statement further said that the Unlawful Internet Gaming Enforcement Act (UIGEA) passed in 2006 was not effective in prohibiting online poker as was intended because, although some [geolink href=”https://www.pokernewsreport.com/online-poker-rooms”]poker sites[/geolink] did adhere to the statute and leave the U.S. market, other sites sprang up to take their place. The AGA supports strengthening the UIGEA and allowing the licensees of new regulations to be based in America so that consumers can be protected and not subject to the risks of depositing money in offshore locales.

The AGA believes that a regulated internet poker industry would generate 10,000 good-paying, high tech jobs that are desperately needed in the stale U.S. economy. Legalization of online poker could bring $2 billion in tax revenue. The AGA is not backing any specific proposed legislation at this time, but feels that any new regulations should include the following:

Any online poker sites licensed in the U.S. must adhere to the current strict regulations that land-based casinos comply with. Casinos historically have had a good track record of regulatory compliance. Tough regulation is seen as the best way to operate and regulations currently followed by casinos are time-proven and would ensure that U.S. consumers are putting their money in a secure environment run by a respected operator, the statement said.

The AGA did not always support online poker, but is now convinced that new technology can accurately identify those wishing to play online to prohibit minors and those with gambling problems to log on and gain access to poker sites, a problem which deeply concerns many critics. Facial or voice recognition confirmation procedures could be put in place to verify players.

“The safe bet is to allow states to license and regulate online poker following federal guidelines. Such action would protect U.S. consumers, keep children from gambling on the Internet, and provide the tools law enforcement needs to shut down illegal Internet gambling operators. It would also create new jobs and tax revenue at a time when both are sorely needed,” Fahrenkopf said.